Posted by: Editor August 24, 2015 in English, Movies Leave a comment

It is not very often that a geeky concept proves equally appealing to the masses – but there is one exception that has fascinated humans for ages. Yes, we are talking about Time Travel. The countless ways it has been featured in works of fiction from H.G. Wells’ Time machine to Terminator to Harry Potter and the Prisoner of Azkaban to 2012 movie Looper, are just a few popular beads on the string. 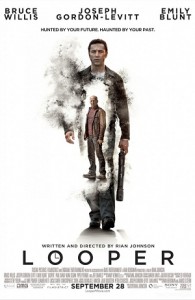 The concept itself is so fantastic and involves such profound consideration of the circle of causes and effects, that it always defies complete satisfaction to human intellect. And we are far from having understood it entirely, thus leaving an area open for many more future explorations.

Combine the equally luring concept of “Predicting the Future” with time-travel and if you get the mix just right, you get something very potent and interesting. As much as all the moral boosters keep reminding us to live in present, predicting the unknown future proves way more mesmerising and we are always up for a little palm reading, an astrologer’s prediction of the day or the good old and boring financial forecast. We are scared of the uncertain and unknown and so we want to glimpse what the distant future is going to look like – say in 50 -100 years from now.

The “Star Wars” series showed us a future full of inter-galactic travel, the “Terminator” series showed us a future where machines rule men, Philip K Dick’s stories settled us on Mars, “After Earth”,”Avata”‘ and more recently Interstellar showed an overpopulated and nearly inhabitable, Earth. “Looper” also forecasts a grey, worn down future world that is full of chaos, violence and brutality.

Rian Johnson wrote the script and directed this film that takes on one of the most intriguing aspects of time travel – what happens if a man’s present self encounters his future self? The present self in the case is Joe (Joseph Gordon-Levitt) who works in a crime syndicate as a hired gun – termed Looper.

The year is 2044 and Joe’s job is to dispose off targets that are sent from year 2074 – reason being the bio-technology advances that make it impossible to get rid of a body in 2074 and therefore to kill. Now, this time travel is far from legal and the ‘loopers’ need to be taken care of i.e., in order to tie the loose ends, the “loopers” need to be killed. So, inevitably, every looper has to face his future self some day and kill him. Complicated enough or simple enough – depends on the way you choose to look at it. You get paid in gold for killing your future self and you get 30 years of future ahead to enjoy with that money.

However, even with the fortune in gold, loopers are basically violent people. They don’t necessarily go home and live a life of peace and prosperity. The movie also assumes that in spite of getting into numerous fights, they do live for next 30 years. Frankly, there will be more chances of them getting killed in a drunken brawl. Anyway, even though 30 years is a long time, no one likes to die – period. So, naturally loopers are tempted not to kill their future selves. This is absolutely not permitted though and the penalty for not “Closing the loop” is immediate death. But Joe is a very resourceful man and when he faces his future self (played by Bruce Willis), a new chain of events start.

Old Joe attacks young Joe and escapes with gold bars. Now young Joe is being pursued by his employers while old Joe is on a mission to find a child. An exceptionally gifted child, who 30 years from now will become “The Rainmaker” and will start methodical execution of loopers. It was on the rainmaker’s orders that old Joe lost the love of his life and was sent back to past to be executed, and he wouldn’t settle for anything less but destruction of the child.

But the moment old Joe escapes, he creates an alternate time-line. Now he has fading memories of his life as it was, if he had closed the loop and the new life that his younger self is living, because he failed to close the loop!! The new future means that old Joe never had last 30 years as he remembers, neither did he ever met the woman for whose death he want to avenge himself. By changing the timeline, he is erasing the cause for his actions. Younger Joe however has a single purpose, to close the loop before he dies a painful death – thus, both young and old selves are seeking self preservation. In doing so, they are blurring the lines of the future and the past of his life. It is now all probabilities and each probable future glows and dims as the course of event changes.

The quest for the child brings them to a farm owned by Sara (Emily Blunt), who lives with her son Cid (Pierce Gagnon). Young Joe wins her confidence and discovers that both Sara and Cid have telekinetic powers, those of Cid are almost frightening.

It is now that young Joe has to make a decision: self preservation or protection of Cid? – not only from the current threats but also from the future that will be triggered if he lost his mother at hands of loopers and will grow up to be “The Rainmaker”. What is the way out of this conundrum, where every action by Joe has become a cause and an effect simultaneously? How do you destroy a circular chain of events where everything is interlinked?

Looper went on to become a commercial success and was critically acclaimed as a brilliant, thought provoking thriller. One of the strongest points about the films is that instead of spending too much film length on the ‘how’ part of time travel, the film focuses on the effect of time travel on its characters and delivers some good old fashioned action and drama.

A few bits involving the gangster chases and supporting characters are superfluous and could have been cut to make it tighter; ‘Looper’ still has the ability to keep you on the edge. All the main actors have got meaty parts, but Pierce Gagnon takes the prize for his performance as a confused and troubled child who doesn’t know how to control his powers.

Are your curious to watch the movie or did you already watch the movie? What are your thoughts about the movie? Do you like to say anything related to the movie or this review? We always love to read your genuine remarks. And yes, do not forget to share this article with your friends over various social networks via Twitter, Facebook, Google Plus and others. And yes, you may like to subscribe to our RSS feeds and follow us on various Social networks to get latest updates for the site to land right in your mail box.

Previous: Cricket At Nukkad | Hindi TV Serial On DVD | Personal Views
Next: What We Learn from Steve Jobs’ Commencement Speech at Stanford University