Posted by: Editor September 28, 2022 in Books, English Leave a comment

The great advantage of living in today’s world is being able to tell your story to the world and in the same way, being able to read the stories from around the world and find that there is something about humans that seems to be a common thread in all cultures and all civilizations – a spirit to survive. There is also an opportunity to conduct research into historical events and find untold stories and explore those characters with a wider view of events.

One of such books is author John Fletcher‘s debut work Wuhan. Set in the World War II era, this book explores the Japanese invasion of China with a battleground centered around city of Wuhan.


We have reviewed books set in similar settings and exploring similar journey here at Thinkerviews: 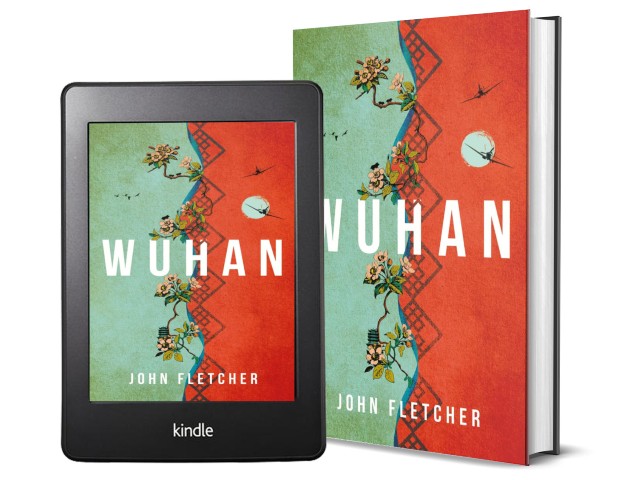 As you can see, the book has a moderately good cover page. It could have been better and eye-catcher to get attention of book explorers. The red and green background are distinguished in zigzag pattern via traditional designs from Chinese culture gives it an authentic look for sure. But, it looks like a book from old times, at the first glance.

The book weaves a few different threads to give us strands of journeys.

One is a farming family in small Chinese village – of a girl named Spider Girl. As she brings home the news of Japanese invasion and convinces her father of the absolute necessity  of leaving behind their land, their family home, the resting place of their ancestors and everything they have known through their lives.

This massive decision takes its toll on the family, but they do leave and join hundreds of thousands of other people who are on a similar journey. The destination for this human exodus is the city of Wuhan. But the way is full of perils – as they run out of food and water, face bandits and thugs, aerial attacks and familial disputes, the whole family perishes – except for the Spider Girl and her father.

When they finally reach Wuhan, the Father joins the army and like any good father of those times, he sells the Spider Girl to an employer.

This employer happens to be the women running nursing facilities for wounded who wash up on shores of Wuhan. Here, Spider Girl becomes part of a household as her mistresses engage themselves in the revolutionary activities with the famous Lin sisters as the China under the leadership of Chiang-kai-Shek is getting used to the Marxist ideology.

And then there is literary figure of Lao She. As we learn how he has to leave his family in a war-inflicted zone to travel to Wuhan. Here, he is expected to work with other prominent writers from all wakes of China to create propaganda to encourage the general populace of Chinese farmers and workmen to take up arms and unite against the invaders.

As the lives of all these characters cross one another and Wuhan faces a challenge of facing an unstoppable army, a new nation may emerge but not without costing numerous lives.

There have been a few books based in the world war II era, but I liked this book for the detailed descriptions of ways of lives of a nation. Today, we know of China as this vast nation. But in the early twentieth century, it was a vast landmass of millions of people living as they had lived with traditions inherited over thousands of years.

A farmer’s land was his sacred inheritance, they lived to protect the land and the family, the notion of familial duty and the teachings of Confucious were their governing principles through life:

That to be alive without your family was to be dead. A person by themselves is not alive. Only in the warm, constant fractiousness and love and service and certainty of a family can one live.

And it was not without extreme circumstances, that a farmer would take his family on a journey like the one depicted in this book. The author’s description of this journey is detailed and tries to give us an extremely realistic, although at times very detached and theoretical, view of how events would have played out. Sometimes, it is hard to understand and explain the mindset and behaviour of people in a different culture and research can take you only so far.

I like the way the book has the journey of Lao She which explores the literary tradition in China. A country that speaks multitude of dialects and inherit thousands of years of civilisation with dynasties forming and falling would naturally be filled with stories of battles and victorious heroes. But such history also lives long lasting divisions and feuds and it takes visionaries to look past that:

Why is the mandate of Heaven given, why is it taken away? Why is order always followed by chaos, chaos by order? Because when life is good, life is easy, people forget how to work together, look out for each other, cooperate. Things fall apart. But when life becomes terrible, People remember they are not just individuals but a People.

There were the Zhou dynasties, which collapsed into the chaos and slaughter of the Warring states till the emergence of our first emperor. The Great Emperor seized control and ruled. Then he died and was followed by terrible civil wars till the Han Dynasty brought peace and ruled for four hundred years, till it too collapsed into the Three kingdoms, and so these cycles went on till our own times with the collapse of the Manchu Dynasty and our unending civil wars.

And all this historical stories are shared through the folk-theatre, puppetry and musicals. Lao She who admires these artists, tries to make the modern writers see what it takes for literature to appeal to people so that they can inspire the common folks of their times to think in terms of united China and go to war for it.

To write good propaganda, one must destroy every vestige of subtlety, suppress any literary instinct and simply hammer the audience with blows of emotion and melodrama. In a language understandable and inspiring to every peasant and factory worker in China. So that, duly inspired, the millions will rise up, seize upon their weapons, and march out singing triumphantly to defeat the barbarian invader.

While we know that the Marxist principles and communism were admired and became accepted in China after the world war II, we also learn that the pre-war period was still very feudalistic with wide gap between various classes of society:

Our country is in a very difficult position. Not only because of the Japanese invasion, but because our ruling class, know nothing whatsoever about the people they rule. Now they are forced to discover us, who we are, how we think, how we behave, how we speak and should be spoken to. To see how well ordinary Chinese people can improvise, organize ourselves, be shrews, resourceful, responsible, moral people. And they must come to trust us rather than fear us, free us, give us control rather then repress us.

And the book also has lots of battlefield and strategic discussions as it traces the path of various battalions and divisions of fighters, for example the Sichuan soldiers and absorbs historical facts and anecdotes like the one about a rifle that made its way across the Himalayas:

The Lee Enfield had been that standard issue rifle of the British Army for fifty years. Five years ago, a platoon of British soldiers had been ambushed in a remote mountain pass in Afghanistan by Pathan tribesman and killed to a man. The Pathan stripped their bodies and took their rifles. Since .303 ammunition was scarce they sold them on across the Himalayas and this particular one hand ended up  in Sichuan.

The book has good research backing it up and although long, is readable as the characters move in and out of the centre stage. It is a recommended read for those who want to see the play of armies across a vast nation that brings people out of their ways of lives and away from families to build a new place for themselves.

In summary, an exploratory journey through the China facing world war II, internal class struggles and winds of revolution with the city of Wuhan as the backdrop…