One of the best perks about reading is that it opens the doors to so many worlds and it is so enjoyable to read as many different genres as possible to remind us how every book has a unique point of view to share. Exploring the Indian authors writing in spy thriller genre I came across “The Vizag Sabotage“.

Credit once again goes to the great friends we have on Team Thinkerviews who added it to our ever-growing Kindle collection. I liked the premise of the book and decided to delve into it…

I enjoyed the book and here are my views on it on behalf of Team Thinkerviews.

Being a key to a portal to a fantasy world, the book cover plays quite an important role in influencing purchase and/or reading decisions. So, let us take a look at the cover page of “The Vizag Sabotage” to find out how appealing it is. 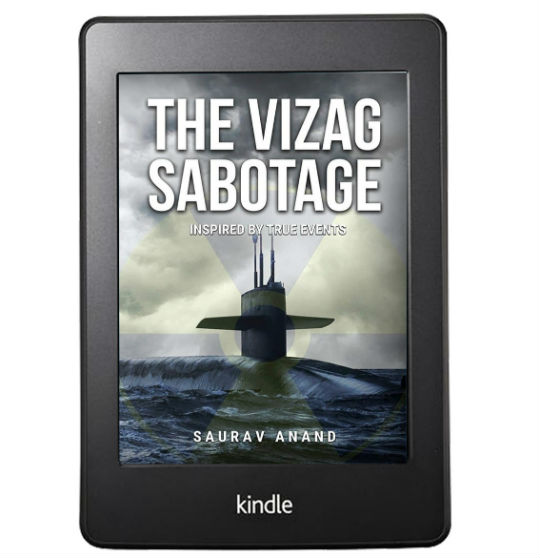 Being a fiction inspired by true events, the book talks about the sabotage of something very important which has links with ships, shipyard and nuclear submarine. So you can expect the hood of a submarine appearing on the sea surface in quite a dangerous environment, as the best illustration for the cover page of this book. The same nuclear warship is shown “focused” or “targetted” though yellow lines. (I guess, here a standard telescopic view of targetting it, could have been a better illustration).

The cover page is interesting and moderately good. More importantly, it reflects the title of the book quite effectively.

It is a sleepy Sunday evening when a locomotive driver in Vizag almost runs over a guy lying on the tracks. When the person doesn’t move on honking, the driver and his helper take a close look at him. He is not moving, because he is already dead!! Someone is trying to pass a murder as just another suicide on the railway tracks.

As the police starts investigating, they find that deceased Suresh Nair was working in Hindustan Shipyard. As they look deeper into the matter, they find that this was not the first suspicious death, but the latest one in a series of deaths of highly skilled people – all involved in the nuclear submarine project.

It is time to bring the Intelligence Beaurau in. So we meet Twisha Anand – a young agent working undercover in Darbhanga where she successfully unmasks terrorists planning to escape India. She is briefed by her boss Rangarajan about her new mission as a nuclear scientist at Hindustan Shipyard in Vizag. While posing as a bait, she can investigate the suspicious deaths of other scientists.

Within a few days of her arrival, Twisha‘s life in vizag is endangered when a hole is shot through her kayak. When she survives that, the enemy agents capture her laptop and install a micro-chip in it. Through the hacked computer they find out about Twisha’s trip to Borra caves. Here, they successfully push her into an underground cavern and then disappear from the scene.

Unbeknownst to them, not only Twisha survives, she also figures out a few leads that bring them to the safe house of the enemy agents. But all they find is an empty apartment and a smoking safe.

The battlefront, however, has moved by now, as the enemy submarine damages an Indian warship and flees. When the Indian hunter planes arrive to confront it, they are attacked by enemy warplanes. Will this lead to a full-fledged war?

Right in the beginning of the book, the author tells us how he was inspired by real events:

In October 2015, a report was published in the Times of India about unnatural deaths of 11 Indian nuclear scientists, during the time period of 2009 – 13. Cause of death ranged from drowning, strangulation, road accidents and mysterious chemical fire.

This book is an attempt to extrapolate those events on a fictional storyline.

This is Saurav Anand‘s first book in this genre and I think he has selected a very intriguing topic to write about and has done a good job of turning it into a good thriller book. At times, it feels like watching a spy movie. The story is fast-paced with good, modern, real-life characters who are easy to relate to.

Twisha is a good intelligence officer and a capable agent, but at no point she comes across as “mistake-proof”. She does her job, but there are times when the enemy agents play a better game and there are times when Twisha shows better timing and strength. So, it is a well-balanced story. The author also shows her the ‘girl-next-door’ side of Twisha as she visits her parents and gets introduced to a prospective groom. She is a loving daughter, sister and aunt who looks forward to spend some quality time with her family whenever she can manage.

I liked how the author describes the background world of nuclear submarines and the expertise required to build them is an elite club including only a few nations around the world and none of them are very keen to share it. So, it is largely Indian scientists’ innovative capacity that will make the program successful for India. There is no doubt that India’s neighbours may perceive our increasing capability in advanced weaponry as a threat and have their intelligence networks working overtime to infiltrate and incapacitate our high-profile weapon programs.

It’s a known fact that the nuclear submarine club is not welcoming new members. There is no technology transfer for this weapon platform.

The Chinese have a strong reason to deny India from acquiring the most deadly and difficult to trace component of the nuclear triad. A nuclear submarine capable of launching ballistic missiles which can reach Beijing and Shanghai must be a major concern for their military planners.

Saurav Anand also captures rumours like how every computer motherboard manufactured in China carries a secret chip that allows back door access to that computer. Although China officially denies such allegations, the author points out that if they really had installed such chips, they would hardly want to acknowledge it publicly.

The author does a good job of describing beautiful tourist spots around Vizag and how the young populace of the cities like Vizag is looking at balancing their work lives with excursions like kayaking, visiting malls and exploring caves. The access to mobile phones have in some ways ensured more safety for young women moving around on their own.

The most interesting parts are however when the author gives us detailed technical descriptions and explanations of how the battle weapons are configured and operated in real life:

The command for “Action-stations” was given, jarring alarms started ringing across the ship. The well-trained crew of INS Ranvijay was at their specified stations within thirty-seconds. The four gas turbine engines in the belly of the ship started pumping out seventy-thousand horsepower at full throttle. Massive amount of torque was transferred to the two huge propeller shafts which spun the propeller screws, jutting out from the tail-end of the ship. INS Ranvijay had accelerated from a cruising speed of 25 km per hour to about 60 km per hour, within a matter of seconds.

As the Q-8 submarine approached a depth of sixty feet, its hydroplanes leveled out. Her speed had slowed down to five knots. Behind her large conning tower, one of the missile hatches was open. YJ-18 missile was standing silently in its silo, while the wires attached to its frame, were pushing data into the small processor placed in its cone. Data about the target’s bearing and range, which will be used to create the flight path.

Launching of a missile from a submarine is a complex operation. Obviously, one can’t start a rocket motor while being submerged under water. Either pressurized air or steam is used to propel the missile out of the water.

Inside the Q-8 submarine steam based propulsion was used. This started with the firing of a small rocket motor, suspended over a tank of water. Rocket’s hot exhaust converted all the water into steam within a split second. This high-pressure steam squeezed through a nozzle into the missile silo. Pressure built up fast within the silo, till it reached a point where the steam’s thrust was powerful enough to lift the missile. At this moment, all the supporting fixtures of the missile detached themselves and the missile rose through the silo.

While I enjoyed reading the book for its content, the proofreading lets it down quite a bit. There are missing punctuation marks at numerous locations, quite a few typos and a jumble of tenses here and there.

We would not like to list it all out here of course, but lets hope the next edition of the book is error-free…

All in all, an enjoyable book if you have a few hours and want to entertain yourself with adventures of spies….