Posted by: Editor October 9, 2022 in Books, English Leave a comment

Investigative crime thrillers have always been a popular source of entertainment for the readers who enjoy the thrill of the problem solving and seeing good guys defeating bad guys, whether it is in books or TV series or films. Such works also generally depict the changing times and controversial topics of the day debated in a fictional setting, thus allowing the readers to explore the extent of “what-if” scenarios involving cyber crimes, intelligence analytical networks and psychological warfare between countries.

Going through a stack of books marked as our reading pile, I came across  a book by author Aroon Raman, titled The Shadow Throne. The book was published by Pan India in 2012. As the author explains in a note to the reader, the book was set considering the complex internal and external security threats that exist in a county like India and his exploration of fictional scenario where political and beauraucratic stasis can lead to. But it is a work of fiction and is reviewed as such by us on behalf of Team ThinkerViews. 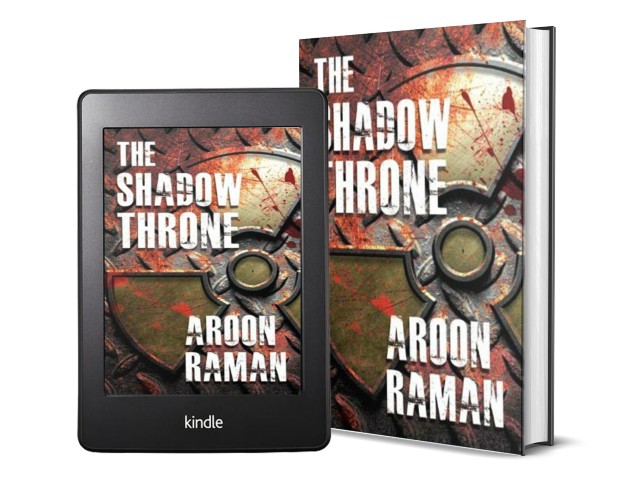 As you can see in the image above, the book cover shows what could be a door to a strong room with multiple pieces coming together in the center, or it could be fragments of an ancient seal or a door to a secret space – depending upon the reader’s imagination. The portal is covered in drops of blood and once you start reading the book, you would be able to imagine where this place could be.

A moderately attractive cover page, which will appeal to the readers of suspense thrillers.

Chandra is an investigative journalist living in Delhi. On personal front, he has been dealing with the grief of losing his wife Yamini and at first, it is a welcome distraction when Inspector Hassan calls him and asks him to come to Qutub Minar, where a dead body has been found. Together, they examine the murder scene and are astonished to see a man that appears to be a giant out of Greko-Asian legends. Chandra takes some photographs and trying to place the familiar profile of a man, rings a historian friend called Meenakshi Peerzada.

But, soon after this, Chandra, Meenakshi and Hassan all are warned to stay away from the case and it is taken over by other agencies. The trio is aware that they are being watched and their electronic communications are tracked. In spite of the warnings, Hassan responds to a mysterious visitor from out of the country and together Chandra and Hassan leave for Afghanistan.

Here, in the area of Bamiyan where the ancient Buddha statues were erected by the Kushan kings thousands of years ago, they are on a mission to find the headquarters of a shadowy organization called Xiphos Soter, that is moving to restructure the map and political set-up of Central Asia.

Repeatedly, they are attacked, captured and tortured. Meenakshi is also kidnapped and then attacked after she finds a clue at the location of the murder. In this game involving spies and soldiers, no one is really sure who belongs to which side.

Can they stop the disaster that will destroy millions of lives and destroy peace of the region they call home?

As you can see from the storyline, the book involves a fast – paced story featuring a journalist and a police officer who try to decode a murder mystery, which soon turns into a thrilling chase involving multiple security agencies and countries. The author sets his book in old Delhi, the amalgamation and melting pot of cultures and symbols of unity and his protagonist loves the city and shares this love with us through descriptions like below:

This crowded, chaotic thoroughfare of present day in this seventeenth century city of Shahjahanabad, was once also a fabled street of the East, a canalled way designed by Shah Jahan’s daughter Jahanara to reflect  the light of the moon.

Like the city, Chandra is also a strong character, who goes beyond his first call and sticks with his task and his story until the end, in spite of facing dangers he could not have imagined when he received that first phone call. He gives us the glimpses of his motivation in becoming an investigative journalist and his tenacity in following a story:

In a world that was increasingly dominated by instant news, manufactured to titillate rather than to inform, penetrative investigative journalism was fast becoming a rarity.

Chandra is the narrator, and through his perspective, we see the geographical and geopolitical background as he travels to the dangerous locations in order to solve the mysteries surrounding this case:

Afghanistan as a country shows up relatively small on the world atlas, due to the peculiarities of the azimuthal projection system used to depict a spherical Earth on most maps. In reality its landmass covers over a quarter million square miles. 80 percent of this immensity is arid mountainscape. The plateaus and peaks of the great Hindu Kush range slice through the country across a northeast – southwest axis as do the Pamirs at the northern extremity of the country, making Afghanistan one of the most inhospitable terrains on the planet.

By the late 1990s India’s security environment – both internal and external – presented an extraordinarily complex picture. The looming shadow of China to the north and east; the bubbling instability of the political and social cauldrons of Pakistan – Afghanistan; the internal security challenges from a fledgling but rapidly expanding Maoist insurgency, compounded by hydra-headed terror threats were but a few of the pressure points of the time. Hence, the National Security Council (NSC) was established.

In other characters, Meenakshi Peerzada is the historian and is portrayed as a simple yet strong person who is pulled into this mystery with no idea of how dangerous it can be, and still battles it out in spite of being attacked in her home. She is the historian with passion for studying as well as teaching history.

To go beyond dry facts, to bring alive the tapestry that was the past; the players, their hopes, fears, loves and hates, their politics – always the politics – that complex interplay of power and patronage, was to bring history living and breathing into the classroom.

The author introduces us to the historical element about the Kushan kings who ruled in central Asia and who combined their Greek and Asian heritages with their enduring love for Buddhism to give us the monumental works of arts. One of the oldest surviving texts also belong to this era – the MilindPanha – a treatise published around 100 BCE, that the author has weaved into the clue for the coding element of the book.

Inspector Hassan is the mysterious character that undergoes many changes in his role as the story progresses as he is cast in different light with every twist and turn in the story. He also suffers a lot while trying to fulfil his duties and it is good to see that he has some friends to support him during these trials. Especially Nalini Ranjan Pant, who is key to unravelling the conspiracy.

The world of intelligence is a complex one – and sometimes very treacherous.

The book is generally well written with good readability and some insightful descriptions and observations like below:

This infinite canvas where the earth stretched away into the limitless horizon and where all feeling of time and distance seemed subsumed into the here and now; I realized the futility of fulminating at something I could do nothing to change.

I was a cynic, believing that one could not act in a spirit of true virtue alone, that all altruism was ultimately thin-veiled self-interest. But nor did I admit to the existence of pure evil.

However, there are times where it feels like the timeline of events could have been made better with some editing and there are some typographical and grammatical errors in the book and expressions like ‘bounden duty’ that could be improved.

For example on Page 22 – I squinched my eyes open.

This could be – I squinted my eyes open.

In summary, an interesting mystery for the readers who enjoy suspense thrillers..