Posted by: Editor January 28, 2022 in Books, English Leave a comment

Although fiction is one of the greatest selling and mostly loved genre in the book-world of today, there is also a segment where historical fiction based on real events days past is a favourite with readers. Not only it offers the escape into past and opportunity to look at it with our contemporary glasses, it also offers a chance to review and understand history as it takes place over hundreds of years and serves as reminder that what we take for granted today was not always so.

Writer Emma Donoghue has her own fan-following, with her most famous work with the Hollywood connection being ‘Room‘, she also has published some works that are historical version of past events, e.g., The Pull of the Stars based in the influenza pandemic of a century ago or The Sealed Letter, which is based on account of a court case that took place in Victorian London.


Published in 2011, it is this book with which we take a look at the initial steps of the woman-ist movement, the matrimonial laws of nearly a century ago and here are our thought on this intriguing book on behalf of ThinkerViews. 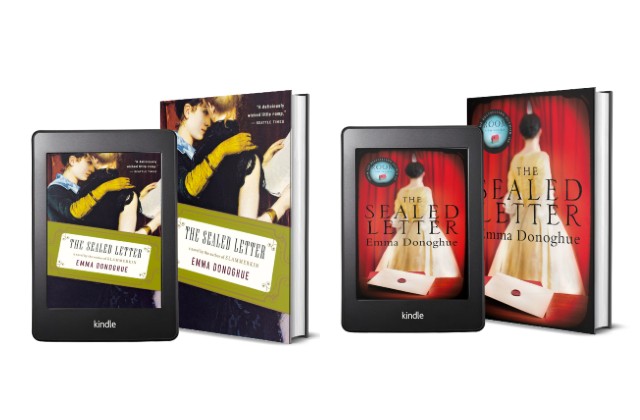 The book has different covers for different versions. Here are a couple of them. As you can see they are quite different. Actually, the newer version is visually more appealing.

The common things you can find in both of them are “a sealed letter” and “the lady“. While in the first cover you see her enjoying togetherness while dancing with her man, in the second version you can see her alone from the back. While the first cover has a little dull green shade as the major contributor, the second one has the cheerful red.

I found neither of them very attractive and stand-out, but both of them are detailed and faithful to the story. So we can consider them moderate ones.

It is the last day of August on the busy streets of London, when Emily Faithfull, known to her friends as Fido, is approached by an estranged friend Helen Codrington. A few years ago, the two were close as sisters, but then Helen went to Malta with her husband, and this is the first chance encounter since. With some reluctance, some resentments at the estranged years, the two pick-up the threads of their previous friendship.

The years have turned young, shy and inexperienced Fido into a businesswoman, a known philanthropist and a champion of women’s rights movement. But Helen is still trapped in the same unhappy marriage. If anything, she seems to have gotten herself further entangled with extra-marital friends and suitors. Soon, unwittingly, Fido is actually becoming a go-between the lovers and at times providing a place for their clandestine meetings.

But Helen’s husband, Admiral Codrington is also now aware of his wife’s absences. Once confronted with proof, he initiates divorce proceedings, not an easy process in those days. All of them are dragged into the court of law, to face their actions and see the drama of their private lives put on display as sordid entertainment for all and sundry.

When summoned, Fido escapes the city rather than go to court. But how long can she flee persecution, accusations and the blows to her and her family’s reputation? In the end, she has to show up to face the music, go through with the trial and learn of all her follies. In divorce proceedings, who is treated right after all?

Will any of them survive this trial to the end? What of the family that is broken beyond repair now and the lives and reputations destroyed? And what part does the sealed letter play in all this?

As I noted above, the book is based on real events and some of the characters actually lived and worked through the times. They were embroiled in a court case and there are still newspaper cuttings in archives that tell their story – however warped and misunderstood. Most of them did survive, but at a huge cost to themselves and hardly unscathed. The book is well-written, richly detailed and quite believable in terms of how it brings to life this blend of fictional version of realities past. After all, if we are to only go by written version of events, we are depending upon a certain point of view and it is nice to be able to examine some of these in today’s world.

For example, how Fido and her female friends are trying to prove that women can do the jobs of skilled labour by starting a press – called Victoria Press – that employs women to set the types, proof it and print the newspapers of the day. Or their first small win that allows girl students to sit examinations for higher educations at places like Cambridge.

The stark reality of then and today still is that in order to even get a chance at these opportunities and make this happen, the women seem to have to forego there chance at marriage and children. They had to have unblemished reputations as any reflection on their character would inevitably be linked to the “Woman-ist” movement of the day. Change is always difficult and the Victorian society of the times, in spite of being ruled by a Queen, was in no way going to make it easy for women to move outside their acceptable sphere of behaviour, as can be seen from this excerpt below from a newspaper review of 1871:

If our women, whom hitherto we have regarded in a certain sense sacred to the home life, come swaggering out into the streets like noisy brawlers in a rude crowd, they must forgo their privileges of respect and protection for that liberty which includes self – assertive competition, rough words, and rough shouldering aside.

Throughout the book, the author weaves the women’s rights movement of the day, but that is not the central thread. That is the friendship between Fido and Helen and how it skews one’s world views to an extent that she nearly becomes a gullible dupe. While it is common throughout the world for people to love their friends dearly, it can also become poisonous, and the author shows us different versions of that friendship here:

The mysterious electric chain of feeling that can link two women of different age, backgrounds, temperaments; that throb of sympathetic mutuality, that chiming note outside the range of men’s hearing.

strange friend, past, present, and to be,
Loved deeplier, darker understood.

Friendships are not always lasting – particularly those that become inordinately violent, and where both parties, by their excessive intimacy, put themselves too much into each other’s power.

And being a courtroom drama is another plus for the thriller lovers. The book is constructed with sections that represent legal terms like ‘Prima Facie’ to ‘subpoena’ to ‘contempt’. And it also highlights the legal journey for a couple wanting divorce on basis of the 1857 Matrimonial Causes Act in Victorian England.

In today’s world where divorce is becoming as common as marriage, it is a good reminder of how this set-up has come into being. How in those times, divorce was extremely difficult to obtain, that the children’s natural custody was given to the father and that there was not much left unturned from a couple’s private life in a very public arena.

While divorces have not become any less uglier or less tormenting to couples going through it and their effect on families is still tragic, at least there are legally more ways to obtain it then to rip your partner to shreds.

Its the way of the world, everyone uses everyone. The trick is to know how much a given person can bear.
The truth was shield enough for all those bluff generations. But he had the misfortune to live in modern times, when it seems, it takes lies to set one free.

Like Emma Donoghue‘s other works, all the characters are portrayed as human, with their flaws and their impulse to do good, to help others, and in spite of all that, they all end up in chain of events, that of their own initiation, leads to much misery and humiliation. Some things don’t change that much over a span of a century or two after all.