Posted by: Editor October 21, 2018 in Books, English Leave a comment

Let us share our unbiased book review for a version of Lalita SahastraNama Stotram with you all today.

One of the privileges of growing up in India is that there is always something to celebrate, no matter what time of year it is. There would be hardly a school going child who has not attempted to write an essay on My Favourite Festival in some class or another.

At the moment, we are celebrating Ashwin (Aso) Navratri or Durgapuja, one of the four auspicious clusters of nine days when we cherish every manifestation of the Mother Goddess. While the Semitic religions of the world have trouble with the concept of sacred feminine, Hinduism has embraced the worship of Amba (Mother Goddess), and so we are taking this opportunity to share one of the most beautiful Stotras written in Sanskrit in celebration of the fact that the Mother Goddess for us is the “home of all arts”. She is the essence and personification of everything that’s beautiful in this universe – she is Lalitambika. 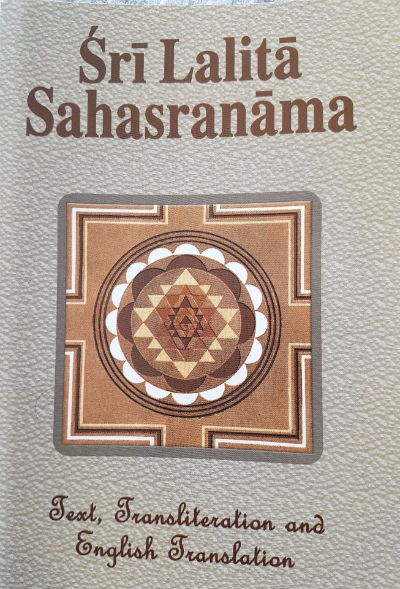 Let us explore a little bit of the Background:

The thousands of years of journey of the people who settled in India can be traced by our literature through Vedas, Upanishadas and Puranas – in that order – both in terms of historical as well as philosophical evolution.

Accordingly, the devas of RigVeda – like Varun, Agni, Indra had specific functions and limited responsibility, until they evolved into the omnipotent trinity containing, Brahma, Vishnu and Shiva. Similarly, the Devis were Vak, Saraswati, Swadha in the early Vedic texts. But as the focus of the Vedic rishis centered inwards with time – as we acknowledged the dual yet united existence of thought and action, matter and energy, Shiva and Shakti – the mother Goddess also became a personified representation of the supreme deity that propels this universe.

While there are a few places where she is worshiped as Ambika or Durga in Vedantaa, the most popular of the earliest works where her birth and battles are described remains the Chandi Mahatmya in Markandeya Purana. This is what forms the basis of all Yajnas on Havanashtmi or the eighth day of Navratri.

Here we learn how she was born from the united Tejas of every single Daivishakti and was adorned with their weapons to fight Mahishasura. She is an embodiment of everything that is good in the universe and she battles the evil, (or allegorically – the beastly part in the humans). As we progress through the Chandi Mahatmya, she comes back when the Devas need her – to kill Chand-Munda in her Kali form, to kill Shumbh-Nishumbha and Raktabeeja.

But it is the fourth Adhyay that consists of the famous Shlokas starting with “Ya devi sarvbhuteshu…”, where we acknowledge that she is omnipresent in all beings and all things. She is the Shakti, the energy, the motive force that forms all the traits that define us as humans. The stories illustrated in the Chandi Mahatmya are a major part of what we celebrate in Ashwin Navratri, where we remind ourselves of her repeated promises through Devi Mahatmya:

Whenever there is trouble of this kind caused by the Danavas, at each such time I shall incarnate myself and accomplish the destruction of the enemy.

And so we come to one the Adishakti/s avatara – described in Brahmanda Purana as Lalitadevi.

The story of Lalitopakhyan goes that when Shiva turned Kamadeva into ashes, one of his Gana called Chitrakarman gathered the ashes and drew a picture out of it. When Shiva looked at this picture, it came alive. Chitrakarman advised this newly born creature to worship Shiva. Being the bountiful God that he is, Shiva was pleased with this creature’s worship and granted him the overlordship of the world for sixty thousand years. Hearing of this development Brahma was very distressed and said, “Bhanda!” And so the new Danava was called Bhanda from that day.

Bhanda established the capital of Shonitpura and reigned on the world. When Devas went to complain about his rule, Brahma advised them to seek solace in the worship of Parashakti. And so, all Devas headed by Indra performed a Yajna, and out of its fires rose a Chakra on which were seated the embodiment of the Tripura Shakti – LalitaDevi. Brahma organised a swayamvar for her where she chose Shiva who was present in his Kameshwara roopa. And hence, Lalitadevi became Kameshwari.

With her armed forces made of all Daivi Shaktis, she waged a war with Bhandasura for four days, killing him in the end, returned the kingdom of the world to the Devas, revived Kamdeva who had been destroyed earlier by Shiva and returned to inhabit Srinagar. Vishwamitra and Maya built this beautiful city on the peaks of Mount Meru where Lalitadevi resides with her husband, i.e, it is the abode of Kameshwara and Kameshwari.

The Stotram addresses Lalitadevi in the thousand ways – with each name derived from the process of her birth, her marriage, her battle with Bhandasura and her abode in Srinagara.

The version we read and happily recommend is “Sri Lalita Sahasranama” published by “Sri Ramakrishna Math, Mylapore”. It includes a fantastic introduction by D. S. Sharma with a simple to read translation of every single name of the Devi. You may order this online at www.Chennaimath.org. 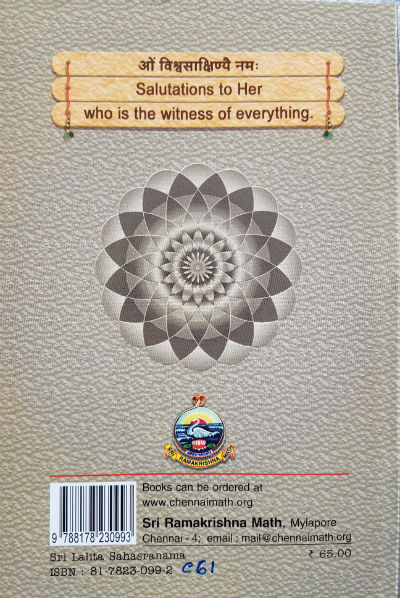 Back Cover of the Book – Shree Lalita SahstraNama Stotram

It may be confusing sometimes to place the works of art in a timeline where they have a religious immortality, especially a Stotra that lists only a thousand names of the Lalita Devi without a story or descriptions. But the beauty of such a work is that everything is distilled into each Naam.

And so based on the namas listed here, Lalita SahastraNaam Stotram is placed after a significant evolution of what we call the Tantra way. The Tantra way takes the Vedic / Pauranic depictions of a deity and distills them into worshipping of diagrams like ShriChakras, or combination of sounds called Panchdashakshari Mantra. It also includes worshipping through Kundlini yoga. Over the centuries, the branches of Tantra have also been known to follow the dark road involving sacrifices to Kali, and so on. But the Lalita Sahastranaam Stotram mostly includes Dakshinachara way of Tantra.

It is also so far in the timeline of the evolution of religious concepts where the tribal deities of early humans have been refined to the extent of epitomes of beauty and poetry. And Lalitadevi is first and foremost beautiful – her face and form, her deeds and ornaments, her tributes and attributes.

Other examples of similar works are Shaktapuranas, Devibhagavatam, and Saundaryalahari – all devoted to manifestations of Amba. And we would like to discuss parts of these at some other time as well.

We have chosen this Stotra to share because this is where the Mother Goddess is shown as the heart of everything that is beautiful in the universe and she represents the best there is in the hearts of Men. She is not angry or vengeful, she has no vendetta anymore, she is loving and in love with her husband, she lives in the palace made with Chintamani. And apart from these physical aspects, she is also the giver of knowledge and salvation. In this era of increased violence and turbulence in human lives, she is the safe harbour for all troubled souls.

The literary beauty of the Stotra is undebatable. The names are sonorous and melodic. There are not many repetitions or hard-to-explain names. And it is a compact Stotra with all thousand names listed in 182 shlokas written in Anushtup Chanda.

As we mentioned above, the book also provides a beautiful transliteration of the concepts discussed in the Stotra and we would like to give you a glimpse of why this book is not just another Sanskrit, hard-to-understand, religious tome.

The connection between various forms of depictions of the supreme deity is explored here with a critical eye:

The kind of symbolism by which the various aspects of the divine governance of the world are represented by means of deities with their appropriate lokas, vahanas, ayudhs, etc. is very common in our Pranas; and our sculptural and pictorial arts are mainly based on it. Sometimes it is simply symbolism run mad. The Tantra, adopts the same method for representing the governance of the inner world of man and indicating various psychological levels to be reached in progress towards God by employing diagrams called yantras for representing these Shaktis. It is appropriate that a Shakti which is essentially a force or energy, should be represented by lines and curves to form a more spiritual symbol of a divinity than an anthropomorphic image.

Also the fact that humans tell complex stories sometimes to highlight simple morals and as much as we get hammered upon the perceived implausibility of the stories from our ancient literature, there is always kernel of truth hidden under the allegory which provides us the guidance if we take the trouble to look for it:

Probably all these battles were meant to be allegories. If so, Mahisa would be the beast in man and Bhanda, the ego in man, and the Devi the divine spark in him. To realize the God in himself, man has to conquer first of all the Beast in himself and, at a later stage, the egoism in himself. The second fight is on a much higher level and with superior weapons – Astras instead of Shastras. In the earlier fight, man resorts to laws and regulations, and in the later to prayer and contemplation. In truth, the battles on both he fronts is a never-ending one. For these Asuras never die. Slain in one form, they rise in another and renew the attack.

Although it is hard to pick, our favourite names are the one listed in shloka 124 and 170:

If you are ready to add the philosophical and beautiful aspects of worshiping Durga to your rituals this Navratri, give this little Stotra some time.

Previous: The last Seychelles flame by Medha Nagur | Book Reviews
Next: An Interview With Hariharan Raju | Author Of Barbarika