Posted by: Editor February 17, 2018 in Books, English Leave a comment

The fabled and mythically gorgeous queen of the folklore and Chittor has been in news over the last year thanks to the Bollywood retake on her life that has excited everyone’s opinion – whether in favour or against. Yes, we are talking about Rani Padmavati – not the movie that is now named Padmavat, but a book written by Anuja Chandramouli and available on Amazon.

As you might know, if you have been following the media, the source material for most of these adaptations would be the epic poem written by Sufi poet Malik Muhammad Jayasi in 1540. He wrote the poem in both Persian and Hindustani Avadhi. This acclaimed piece of Sufi literature is however considered allegorical and largely fictitious as the story is not supported by any of the historical accounts of that era.

Since its first being written, the story of Padmavati has been translated into almost all Indian languages and has been part of the folk songs that have lived through generations. But each adaptation naturally alters the story a little bit to suit the orator’s imagination and the times they live in. Hence there are so many different versions of the tale around us. The lure of telling the tale of the most beautiful woman in the world and her life never seems to lose its charm although the aim of Malik Muhammad Jayasi himself was to impart following wisdom through his poem:

Desire is insatiable, permanent
but this world is illusory and transient
Insatiable desire man continues to have
Till life is over and he reaches his grave

Sounds familiar to an Indian ear, doesn’t it? Bhartruhari said the same thing in Vairagyashatakam:

At the end of the day, it is a metaphorical story of humans chasing a futile dream in this existence and never achieving it. But it is not in human nature to always accept what has been preached through centuries and over time literary works tend to become archaic and lose their appeal to the current generation who lives in a different world from their ancestors and speaks a different language.

So when we came across Anuja Chandramouli’s Rani Padmavati – The Burning Queen, we read it to check out her version of this story and publish our views on it. 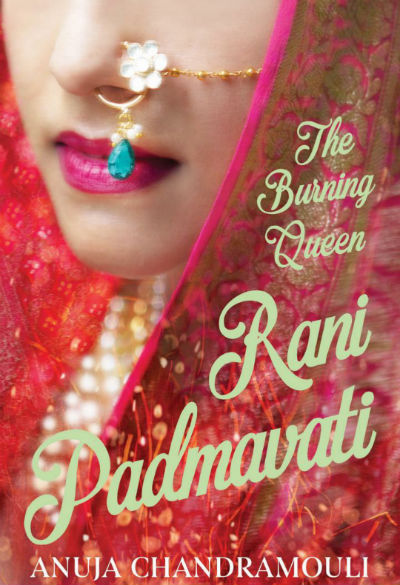 The cover page features half a face of a beautiful woman clad in red. I suppose that’s a homage to the fact, no living man except her husband saw her face in entirety after her marriage, or so the book claims.

The story starts with Alauddin Khilji remorselessly murdering the current king of Delhi Jalaluddin Khilji, who also happens to be his ‘father-in-law’. He defies Jalaluddin’s sons, executes all the conspirators and traitors who helped him in this conspiracy and becomes the Shah of Delhi.

Meanwhile, in the heart of Rajputana, there is a small province of Siwana ruled by Sthaladeva. The joy and pride of Sthaladeva’s family is his brother’s daughter Padmavati who is growing into a lovely woman with every passing day. The author tells us that Padmavati has also inherited her mother’s indomitable spirit and an intuitive intelligence in addition to her father’s heart of gold.

Alauddin’s plans to take over the whole of India triggers fear of capture and war amongst Rajput kings and Padmavati’s great-uncle Kanhaddeva proposes to create an alliance of Rajputs to fight him off. He offers the leadership of this alliance to Hammira Chauhan who is a descendant of the great Prithviraj Chauhan and offers Padmavati’s hand in marriage to Rawal Ratan Singh to bring the Guhilots of Mewar to the alliance.

Rawal Ratan Singh is a kind and good man and his marriage to Padmavati is celebrated with lots of joy and pomp in Kanhaddeva’s capital of Jalore. After marriage, Padmavati moves with Ratan Singh to Chittor, where they live happily together in spite of apparent jealousy of Ratan Singh’s first wife Nagmati. The usual melodrama is enacted on daily basis with Ratan Singh’s mother Dhruva Rani also being against Padmavati. It appears the entire harem is jealous of her beauty and Ratan Singh’s affection for her. But the general public of Chittor falls in love with their beautiful and kind queen and she soon becomes known as the “jewel of Chittor”.

Meanwhile, Ratan Singh faces a damnable scenario of events which leads to him punishing his Senapati Dhanpal, executing one of his courtiers and imprisoning another courtier called Raghav Chetana. The plot thickens when Raghav Chetana is rescued from the prison by conspirators and sent on his way to Alauddin Khilji, in order to bring war and ruin to Chittor.

It takes some time but the inevitable war comes as Alauddin Khilji focuses his gaze on his last target – Chittor, in order to complete his victory over the Rajputs. The siege of Chittor brings starvation and cholera to the city inside the fort resulting in deaths of thousands without even getting a chance to fight. But the conspirators have also been busy inside the kingdom in spreading rumors that Alauddin Khilji’s sole purpose behind the siege is to capture the beautiful jewel of Chittor Padmavati. However, the author makes it clear multiple times that this is only a rumour. That Khilji has no intentions to capture Padmavati. Of course, he’ll take her as spoils of war, but she is not his only reason for the war.

When there is no possibility of victory left, a ‘near the breaking point’ Ratan Singh asks Gora and Badal to escort Padmavati out of the fortress and to the safety. She, however, prefers to commit Jauhar over what she perceives as the coward’s way out and the war ends with Alauddin Khilji taking Ratan Singh as a prisoner to Delhi. This turn of events and unfolding drama is better enjoyed in the book.

Our first impression was that this is a very short book and hence sometimes the story moves too fast and the characters appear to behave in a conflicting manner e.g., Alauddin Khilji is a looter and assassin at the start who orders the most barbaric killings of children and pillage of property and women by his troops throughout all the battles. But at many places in the book, he is portrayed as almost noble with no dishonourable intentions towards women. He declares a holy war on the Hindu kings and ravages the temple of Somnath, but it is never clear if these are only political ploys in order for him to become Sikander Sani.

The recurring message of the book, however, is that Alauddin Khilji always had help from a traitor, an insider with knowledge of the weakness of each kingdom leading to its fall as the Rajput kings of India fell under his advances like dominos, one after another. The biggest weakness of Indian kings throughout the history – the lack of unity, the little battles over small differences that resulted in centuries of invaders looting this land of milk and honey.

The story takes a novel point of view about the cause of the battle and that’s a food for thought indeed as its easier to believe that a shah’s greed and ambition would be a much bigger driver for such a brutal war rather than the beauty of one woman. Whatever may be the reason of a war, the outcome however always is deaths of innocents – in this case, the countless women and children on Rajputana in addition to Padmavati.

Anuja Chandramuli’s strength is how she paints pictures of the space and narrates the scenarios. She creates the characters and turns of events that are significantly different from the folklore in some ways e.g., her Padmavati is from the small district of Siwana in Rajuptana itself rather than the famous Padmini of Singhaldweepa . The dialogues are witty but sometimes filled with juvenile humour that probably appeals to younger audiences, but is not really needed to move along the story.

We wish that Gora and Badal were given their due as described in Jayasi’s Padmavati, rather than just a short appearance at the end.

As usual, will try to avoid the spoilers, but here are some parts of the book we liked:

Words seldom win battles, but they could certainly trigger them…
— — — — — — — — —
We are all human beings, but we are not the same. A lion does not consort with a lowly rat, even though they are both animals.
— — — — — — — — —
People envy kings but what is the point of a crown and throne when it is accursed and stained with the blood of innocent people? Since he is treacherous, he cannot trust anyone. He assumes everyone will have the same character as him. His guilt will cast a gloomy pall over his reign. Everywhere he looks, he will see fear and revulsion. To add to that, there will always be people who will want him dead. He will never be at peace.
— — — — — — — — —
I learned that though pain is there reality and pleasure is the dream, in the end, they are both imposters. Happiness is a delusion too and it isn’t right to expect anybody, even your husband, to serve it up to you on a silver platter…
— — — — — — — — —
Men like me have inherited power and we have long taken our privilege for granted. The shah killed for it and he will never ever let it go, there is the possibility that despite our best efforts, the shad will prevail and Chittor will fall.
— — — — — — — — —
A king’s job was to serve the best interests of his people, even if they didn’t know it themselves.
— — — — — — — — —
This land belongs to Hindus, Muslims, Jains, Buddhists and even those subscribing to the new faiths, but communal harmony is a long way off and human would need to figure out how to fly across the skies and take a walk on the moon before they learn to love their brethren. For now, we must wage endless wars with each other.

All in all, a swift little read if you would like a different take on the story of Padmavati.