When you look at the cover page, author praise comments and book blurb for this third book by author Mahesh Rao, you expect a light, romantic, “happily-ever-after” sort of book along the lines of Jane Austen‘s Emma. The set-up here is Lutyen’s Delhi and so it also naturally brings to mind the movie Aisha which brought Emma to Delhi. Now almost everyone who reads has an opinion on “Emma” and we have read and reviewed a fair few works here that fall into the adaptations of this novel:

And so the expectations with which you pick up this book can also be very set – readers either like Emma or don’t. She can come across as a spoilt, privileged, rich girl who plays with other people’s lives and ends up with messy consequences more often than not.

I was intrigued to see how this version of Emma was put together and I must say I enjoyed reading it, so here are my thoughts on the book on behalf of Team Thinkerviews.

Let us take a look at the cover page of Polite Society. 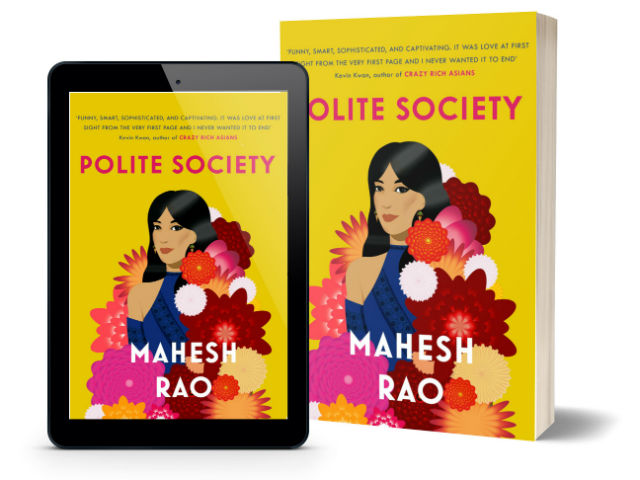 Set in the background of mustard yellow is a beautiful, doe-eyed, dark haired face staring at the readers from the cluster of flowers that cover rest of the page. A moderately attractive cover page, which could have been much better if it featured a metro city in the background and with a more vibrant colour scheme…

Dileep Khurana is not just rich, he is wealthy and the Khuranas are one of the wealthiest families in the sophisticated and exclusive Delhi that remains inaccessible for most of India. His only daughter Ania is beautiful and has grown up with all imaginable privileges. She is also smart and popular not only on social media but also in the social circuit. She knows how to dress, how to speak, how to throw parties and how to snub. Her father adores her and she has a long-standing friend and mentor in Dev Gahlot. She also knows how scandals are buried in backyards of these families and are never mentioned in the polite society.

When Ania brings together her maiden aunt Renu with Colonel Suraj Singh Rathore – at least she thinks she does – she takes the matchmaking as her task in life along with the mission to write the book she has been working on for a long time. She decides to fix her friend Dimple – who comes from a modest hill town in Northern India and has no place in Delhi’s high society – with an up and coming journalist Fahim. Together they visit a famous cricketer turned politician Altaf Masood in his home in Saharanpur.

Of course, Fahim is more interested in Ania then Dimple and after a few unfruitful attempts Dimple finally gives up. Meanwhile, Ania has gone to an exclusive writer’s retreat overseas. Here a famous writer makes untoward advances on her and she leaves with a sour taste in her mouth realising that he won’t be punished for what he did, as he happens to be more famous then her.

Back in Delhi, the Colonel’s nephew Nikhil comes visiting from America and everybody seems to like him and enjoy his company – including Ania who sees him as a romantic partner. Her life carries on through a series of exclusive parties and get-togethers oblivious of the world around her and oblivious to the feelings of people around her as well until it is too late to correct her mistakes…

Although the storyline above gives you brief idea of the main character’s trajectory, it is the background around her that is also so interesting. Mahesh Rao brings to life so many typical socialite characters in the book including opportunist Nina Varkey, outwardly successful Serena Bakshi, publicity obsessed Mehras, ex-air hostess Silky Chhabra and a lot more. The party scenes and especially the conversations from party scenes here reminded me of movie Page 3 and the parties there. A lot of spite and shallowness barely disguised under the so-called politeness and manners.

The author also highlights that the more you have, sometimes the more jealous you are of others. None of the uber-rich in this circle are satisfied, if they have money, they want validation for their artistic taste or literary pursuits, although they hardly care about real art at times. It is all about being ‘seen’ in the right place and saying the “right” things at the exhibitions and events.

And if you have all the money and all the time in the world, and no particular responsibility for anything, you are forever looking for distractions. And when you are rich and popular, you take it as your birthright that the world needs to accommodate all your whims:

This appetite for the entertainment among Ania’s set – It emerged as a hot flare, an acute and insistent demand. And if it wasn’t immediately satisfied, it dissipated just as quickly and then rose elsewhere. They were young, rich, glamorous and bored. Their gazes alighted on anything that promised a little diversion, but the moment there was dip in their enjoyment, their absorption vanished. They often did not mean to give offense; having so many admirers and devotees, they simply did not consider it a possibility. On they went, with their careless endearments and excited intrusions.

These are the people who have townhouses in New York, holiday homes in Europe and go to safaris in Madhya Pradesh and weekends in Hong Kong. Their daily lives are filled with food and conversation that is more global then Indian. They get exclusive Japanese chefs to cater to their parties.

They have no time or patience for the mundanities of day-to-day life of an average Indian. For example, when Ania envisions the future life of someone with a small business in Lajpat Nagar, she sees ordinariness and life filled with complaints and contempt:

Ania saw the cheap cardigans and gaudy shawls in the shop, the nasty sequins strewn on an ill-fitting pair of jeans; she could picture the apartment upstairs with extra chair and gad cylinders crammed onto the balcony; the cycle rikshaws outside the shop, their drivers throwing their bidis into the churned up mud; the sapling outside the door almost dead in its pot.

Ania’s Delhi was unforgiving. If it saw a scar or a wart, it turned away for good.

There are non-rich average people here too – Dimple and Ankit. While Dimple is the quintessential small-town girl wanting to escape her upbringing and background by going to the big city, Ankit is the one who is happy to be who he is in his real life. Then there is the duo of Fahim and Mussorie. Fahim starts as the young, enthusiastic journalist only to feel exhausted after a few years of his career – no longer sure of his own abilities or desires, while through Mussorie, the author shows us the lens through which India is still seen as a colonial playground.

The thing about Emma is that in spite of everything, the readers end up liking her. Mostly because her errors are those of judgement and not of intentions. She just doesn’t have the life experience to know her own follies and at heart she does not mean to cause harm. But with Ania the author doesn’t take that route. She is well-educated, privileged and although not exposed to harsh realities of an average person’s life, has really no chance to plead ignorance of how the world works except for the fact that she lives in her own bubble where the wealth means that she never has to face the consequences of her actions. That actually extends to almost all her set. They get away with everything thanks to their money and their connections.

His lack of regard for consequences had always been part of his reckless charm; taking her on sudden dashes into unfamiliar corners, casually flouting rules and laws. They were both secure in the knowledge that in their world consequences could be delayed, mitigated, ignored.

But Ania has her good moments too, e.g. when she realises that she has caused heartache to Dimple, she feels that in spite of her good intentions, she has caused harm. She also experiences that outside her home environment, she is a woman exposed to the same dangerous world where men can make advances and get away with those if they are famous enough. But these lessons don’t last very long once she is back home and she goes ahead and makes another disastrous mistake. The author than leaves it to our imagination, whether she will pay for it or learn from it.

The author also does not give us an idealistic Jane Fairfax. Kamya Singh-Kaul appears to be poised, successful and sophisticated, but also ends up being irritable and ill-behaved. While Nikhil – the Frank Churchill – equivalent is a fraud in more than one ways. I was glad to see that Dev remains the affable academic throughout.

But that’s where the similarities and comparison ends. Essentially, this is an Indian story and at no point are there forced Indian terms and expressions to make it feel so. The book is well-written and an entertaining delight to read. There are many tracks and segments that could have been taken out and it will still be the same story though. The narrative does go meandering a bit here and there, but there are also segments that make a lasting impression – e.g., Dimple’s encounter with the wooden cake in her childhood or Ania’s recounting of her mother’s story.

There are many memorable passages and quotes in the narrative and here are some of my favourites:

For the first time in years he thought about what it meant to be loved, to have an unqualified attachment to a woman, to be assured of true affection, to be free of anxiety and alienation. It seemed an extraordinary and stupefying prospect.

The autobiographical early memories are fraudulent by their very nature. We don’t just reach for a snapshot from a filing cabinet in our brains. We cobble together mental reconstructions using different sources, images we might have seen or stories we might have heard much later. We readjust them for trauma, for convenience. We superimpose emotions and senses.

That was the enigma of being an outsider: the reasons for exclusion were rarely made clear.

Vigilantism is of course dangerous, and every vigilante will swear that the righteousness of his convictions justifies the aberrant behaviour. But there are some situations where we must recognise the absolute repulsiveness of certain behaviours.

All in all, an enjoyable peep into India’s high society where class and pedigree are valued more than personal values and worth…

Previous: The Forever Years By Vivek Kumar | Personal Review
Next: We of the Forsaken World by Kiran Bhat | Book Review