Posted by: Editor September 2, 2018 in English, Popular Leave a comment

We have written before about Philip Pullman’s most popular work, the “His Dark Materials” trilogy. The majestically vast canvas of the worlds and peoples described in His Dark Materials along with its central idea of questioning the concept of human consciousness, spirituality and the role of religions left many characters and questions in reader’s memories. We all wanted to hear more about this world, know more about lives of these characters. We wanted to find out what went before and what came after the big war.

And so over almost two decades since the trilogy, Philip Pullman has written a few more books about this world. Beginning with Lyra’s Oxford published in 2003 and following it up with another short novella called Once upon a time in the North in 2008.

We know of the great polar bear Iorek Byrnison‘s friendship with Texan balloon enthusiast Lee Scoresby through His Dark Materials. Such strong and long-lasting friendships are usually made in very unusual circumstances. We find out just how young Lee and Iorek met in the Northern island port of Novy Odense through this short novella.

The Coverpage and The Book:

The blue cloth-bound front page illustrates a hot air balloon approaching a little island where the lighthouse and cranes of the port are clearly visible, all against the background of a stormy sea and sky. 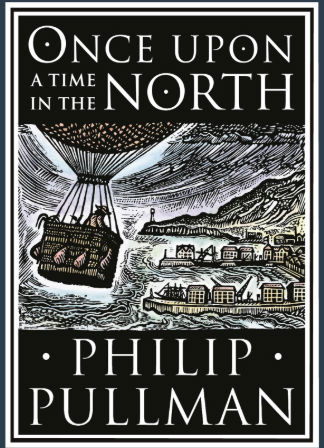 Published as a beautiful hard-cover pocketbook, this package not only contains the story and beautiful illustrations by John Lawrence but also an exciting new board game created by Philip Pullman called Peril of the Pole. 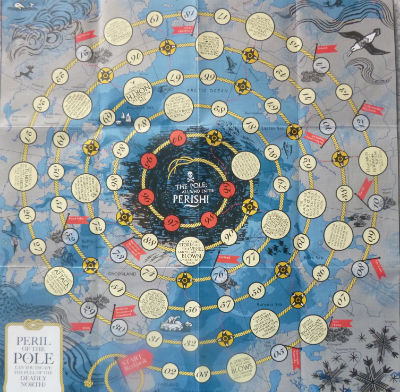 Peril of the Pole Game

There are extracts from The Elements of Aerial Navigation that Lee has been referring, newspaper clippings, a couple of priceless letters by Lyra Silvertongue (one to a Dr Polstead – we are guessing the same Malcolm Polstead who rescued baby Lyra in La Belle Sauvage). 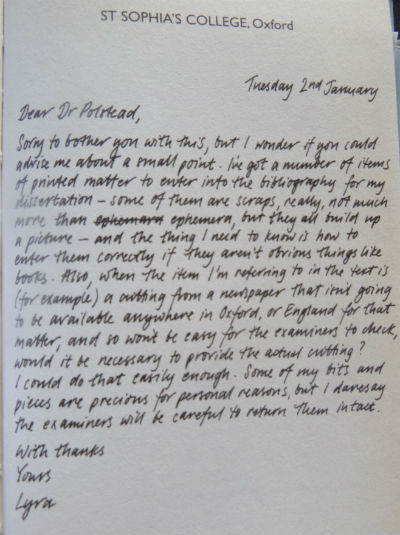 There is also a copy of Lyra’s application for acceptance of dissertation for M.Phil in Economic History. The Master at Jordan College must be proud that they did make a scholar out of her considering they gave her scholastic sanctuary when she was only six months old :-).

Lets have a look at the story…

Young and reckless Lee Scoresby has won a gas balloon in a game of poker and now travels the world with his jackrabbit daemon Hester. Together they go wherever the winds take them. When we meet them here, they are just about to make a thrilling landing on what appears to be an idyllic, uneventful island.

In case you are wondering where is this island of Novy odense, at the back of the book you’ll find this little extract from ‘The Shipping World Year Book’: 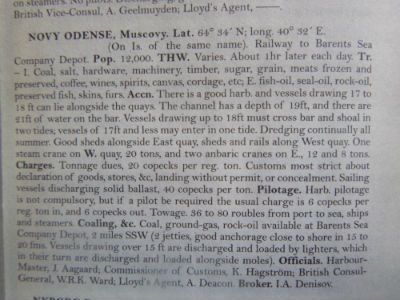 In the first pub he visits on the island, Lee meets Captain H van Breda, and rescues him from an altercation with the bartender. It is here that they discover how the town is rife with political currents in anticipation of upcoming elections and there are multiple quarrels going on. A big mining company called Larsen Manganese has a strong presence on the island including private security force and they are supporting a candidate called Poliakov, whose primary agenda is to get rid of polar bears from the island.

Poliakov offers Lee a job of guarding a cargo ship, but Lee finds that Poliakov also employs Pierre Morton – a ruthless man and a professional assassin Lee knows from his Texas days. They confront each other and Lee refuses to work with Poliakov and Morton.

Through their meanderings in town Lee and Hester discover that Captain van Breda is in trouble and true to their upstanding nature they decide to help the distressed Dutchman out. It is now that we meet young Iorek Byrnison, the great polar bear of ‘The Northern Lights’, who offers to help Lee and Hester in their little adventure.

After some fancy and funny legal arguments and exciting shootout matches, Lee and Hester come out winning, although wounded. But can their little party survive what’s coming next in form of big guns from the mining corporation? How will Iorek escape this sea-bound, half frozen land to his own freedom?

While the set-up for this story is the world of Lyra Belaqua and Iorek Byrnison, the storytelling reminded me of Philip Pullman‘s other works, especially The Adventures of New Cut Gang.

It is short, it is swift, it is thrilling. There are no children involved, and the goodies and the baddies are clearly identifiable. The presence of big corporations looking for Oil in the North is not that far from our own world today where the North Sea is filled with offshore oil exploration platforms owned by multinational petroleum giants. The big corporations have so much power over politicians worldwide that the passages in this book describing a similar situation feel quite familiar.

The interactions between Lee and Hester are quite funny and remind us that the daemons are essentially the same as their persons.

Here are some nuggets from the book:

The person who asked you to do something hopes you’ll do it, or he wouldn’t have asked. And the best judge of whether it would be good for them is them. You shouldn’t worry about giving a particular answer when that answer might suit your personal preference. It ain’t dishonorable to consider your own interests. It might be more dishonorable to do what you think is the right thing for someone else when it ain’t the right thing for you.

There is a struggle going on throughout the Northern lands, of which this little island is a microcosm. On one hand there are the properly constituted civil institutions and other the uncontrolled power of the large private companies, which are dominating more and more of public life, though they are not subject to any form of democratic sanction.

It was a case of thank you very much and don’t come back.

Once the polar bears had a great culture – brutal of course, but noble in its own way. One admires the true savage, uncorrupted by softness and ease. They used to be fine craftsmen too – skillful workers in metal. They used to make an Armour, piece by piece, as they grew older and the would have full set when they’re fully mature.

And Then There Were None by Agatha Christie |Book Review