Posted by: Editor August 25, 2019 in Books, English Leave a comment

The genre of crime fiction is one of the most popular and biggest-selling amongst contemporary books. The world of classic and popular murder mysteries published in the early twentieth century has evolved into many sub-categories including police procedural that allow us to view the crime and the process of solving it by the following evidence and gathering clues rather than a straightforward ‘who-dun-it’. Such books can be an intriguing read as they capture the snapshot of the machinery of law-keeping – their resources, their limitations, their traditions and above all the people who make the police force.

We like reading police procedural books and have published reviews on some of the current Indian writers and their works that fall in this category, e.g. Inspector Saralkar books. So recently when we were provided a copy of Nupur Anand‘s debut book Mehboob Murderer, I snapped up the chance to read it for Team Thinkerviews and share my views on it with you.

Nupur Anand is a Mumbai based journalist, who has an impressive career trail behind her and has now ventured into writing fictions.

Published by Om Books International, Mehboob Murderer features a blood red cover page swallowing up the set-up of a restaurant table with a broken coffee cup and chaos. 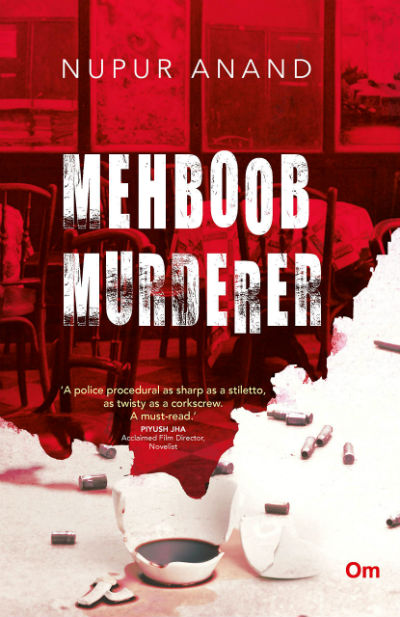 The quote on the front page confirms the impression of a novel featuring crime and qualifies it as a police procedural. The back page is an extension of the front and provides some more quotes in praise of the book.

The cover page is well suited and combined with the title, will do a good job of attracting readers of the crime fiction genre. As Nupur mentions in the book, reading crime fiction can easily become an obsession :).

On a rainy, September night, six people are shot dead in an Irani restaurant called Café Mehboob, located in the vicinity of Churchgate station. No one notices this in the pandemonium of Ganpati Visarjan, rain and India-Pakistan cricket match on a Sunday night. The owner Bookwala walks into this scene of the massacre and calls the police.

Now, although entire Mumbai seems convinced that this was work of a mad serial killer, Abbas’ instincts are saying something different. He believes that this is work of a smart killer, who was after only one victim, but killed six people in order to muck up the trail. Even his team finds it hard to believe this theory. But, he is the boss.

And so the hunt begins. There were six victims: Alam, Natasha, Sunny, Bikram, Sujata and Bhardwaj. Abbas assigns background check for each of these victims to his team members DP, Tiwari, Gulati and Raaste. Soon enough, they start finding dirt on murdered people and start bringing suspects in for questioning by Patil, who can make anyone confess.

It looks like every single victim could have been the target. There is no shortage of motive for either of them, but all suspects have watertight alibis. As days go by, their deadline is looming closer and the team starts to feel the pressure.

On the personal front, Abbas’ affinity to alcohol is increasing, his love life is heading to the tipping point and he can’t help feeling that he has missed something big that could complete the picture for the Mehboob Murder case.

When they have not found the killer on the last night of the deadline, Abbas invites the whole team for a drink. They all play a game and end up with one more dead body…

A big difference between a crime thriller and a police procedural is that there is no glamorization of the crime in any way or means. You don’t admire the killer for his ingenuity or smartness or his “getting away with it” attitude. Instead, you follow hard-working, law-abiding police officers who work tirelessly and meticulously to put together a jigsaw puzzle from pieces of destroyed lives of the victims. You learn a lot more about the victims and the policemen rather than the killer. Mehboob Murderer does not disappoint on this front. Although it doesn’t go into the nitty-gritty of how the department works on the daily basis or quote penal codes, the viewpoint of the book is very clear.

The story comes together through its characters and that’s where Nupur Anand has done a brilliant job.

Intekhab Abbas is the main protagonist and as the book progresses we get acquainted with his good points and his weaknesses – his troubled past, his tendency to drink too much, his struggle to give up smoking, his social ineptitude, his reluctance towards taking his relationship with Jennie further until the decision is taken away from him, his belief in himself and mistrust of work done by others, his tenacity and untiring pursuit of the clues until he has found the answers – it all makes him very real and relatable in today’s world.

His team is a mixture of personalities from aggressive Patil, to sensitive Tiwari to sloppy and unmotivated Raaste. For a crime-filled megapolis like Mumbai, these guys seem to have found the way to chill when they can and focus on the case of the moment. The characters of victims help creating back-stories and subplots, each with its own twist and a nasty villain, whether it is a child abuser, psychopathic lover or a duped husband. Each story shows a different facet of Mumbai and how people survive through unthinkable sometimes.

The book is well-written and easy to read. Right from the beginning, the plot grips you as a mass murder is not taken as work of a mad-man on face value:

Contrary to popular belief, there was always a method in madness. People were often fooled by randomness, where none existed.

Moving ahead, the author mentions…

Serial killers typically take it one at a time if they don’t want to get caught. It was only when they want to hold the city or a place under siege that they are likely to attack a group.

Being a journalist who has lived and worked in different parts of India, Nupur gives us some excellent observations when building the background and atmosphere for her characters. For example, the movement/sentiments against people coming to Mumbai from outside Maharashtra has been captured below:

The unjustified possessiveness over the language and state’s culture became deeply etched if one were a part of a government organisation that furthered the divide between the local and the migrant population in the state. This was typical of all states with a local language in a country like India that wore diversity as a star on its armour.

Or the effect of a hospital on someone who is not a regular visitor there:

Hospitals are scary places. As a visitor, they could instantly catapult you into depression, if you were the sensitive kind. If you were more of the thoughtful make then an existential crisis and the land of nihilism is where it could whisk you to. For the more spiritual kinds, it was a doorway to a different place.

As we see a fair bit of Abbas’ current life in the book and the threads of his love life make the cliff-hanger at end, it will be worthwhile mentioning how the book portrays various types of relationships – none of them perfect, some of them filled with more lies than others:

Marriage is like coming home to a feeling of being less. Whatever you know – or thought you knew – can and will end up changing irrevocably. After a layer of dust and mould begins to settle in on the romance, you just end up as a hostage in that relationship, and the only way to survive is by becoming delusional and covering the start nakedness of the empty relationship by a host of lies.

The perception around our public services is sometimes, not untruly, of inefficiency and delays in service. Although they may be overburdened, as Abbas says:

We all have the luxury of choice, blaming it on an institution and circumstances makes the inertia within you sound legitimate.

In addition to the humans, Mumbai itself is a big character in that it influences almost all major life decisions for people living in it. While it can be a gateway to great success, it also slaps the newcomer in the face with the harsh reality of homelessness, unforeseen poverty, utter lack of privacy, rapid changes that threaten to leave everyone behind, sheer number of people that make them callous about other human beings and their lives, the continual struggle to survive, the temptations around the corner, and so much more.

The book captures the city in its mercurial moods as Abbas wanders in it at all times and follows the lives lived by the people he is investigating. The book also highlights how a sudden, violent death leaves the dead open and vulnerable to the investigators, as they plough through the remaining belongings and try to build a life for the ghosts.

All in all, an enjoyable police procedural, set in the brutal landscape of modern Mumbai, that is worthwhile adding to your crime fiction collection. As I mentioned above, the end is a cliff-hanger, so we can look forward to what Abbas does in his next outing…

A Candid Interview with Nupur Anand | Author Of Mehboob Murderer