Posted by: Editor December 30, 2022 in Books, English Leave a comment

Mahabharata is an epic that has been the source of inspiration for so many writers for countless generations. It has also been one of the most used sources of inspiration in recent years for contemporary Indian writers and we have read and enjoyed such books. You can find some of our review at the links below:

And recently, we received author Tanmoy Bhattacharjee‘s book called Mahabharata 2022. The book won him the Times Write India Contest and has been loved by readers. It was published in Paperback format in 2021 by Ukiyoto Publishing. We thank the author for providing us with a copy of the book. We enjoyed the reading experience and here are our thoughts on the book on behalf of Team Thinkerviews. 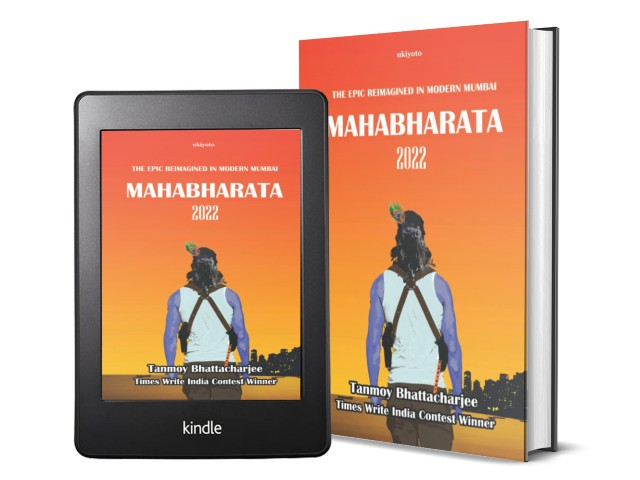 As you can see, the cover page shows back of a well-built man with weapon holsters for guns and a peacock feather in the hair – a signature of Krishna. The illuminated skyline of Mumbai is visible in the background with a simplistic colour scheme of Red and orange.

Once you read the story, you will feel that this cover page has scope for improvement, to display the complex cast of characters and how they interact in the modern world. A more visually appealing cover page will draw in a lot more browsers and encourage them to peruse the story within.

In an ultra-modern and expensive nightclub in Mumbai, a party is in full swing. Abhimanyu, heir apparent to the Asandivat Empire is waiting for his Kaurava uncles. His goal is to unite the Pandavas and Kauravas to face the upcoming threats – both internal and external. But, instead he ends up dead – at his own hands by all accounts.

Radha is a young, police officer, filled with fire and newish in the job. She walks in as the investigating officer, unaware of the family history and convoluted relationships brewing in the background. She is confronted by Duryodhan and ends up handcuffing him. Before things escalate too much, Krishna walks in. And so the partnership begins.

Krishna is a high ranking official in the National Intelligence Bureau and at first Radha finds his enigmatic personality baffling. But, as he meets Shakuni, Draupadi, Arjun, Vatsala, Dusassan and others one by one, she slowly starts to build a picture of this family. In a spur of the moment decision, she arrests Duryodhan’s son Laxmana and takes him on a local train, where both Krishna and Laxmana are attacked. Police officer Eklavya charges Radha with attempted murder and she has to disappear, while Krishna is still in hospital.

Meanwhile, someone has gone on a shooting rampage and attacks Ghatotkach, Shakuni and Drona. Things are unravelling at very fast pace as Nakul is detained by the Afghan government for supplying arms to terrorists, Sahdev is kidnapped by the Myanmar rebels and Yudhisthir is accused of embezzlement of government funds.

Things become worse when Abhimanyu and Vatsala’s charity ‘Any Help’ is blamed for mistreating people of Dharavi and forcing them to work in armament factories in unhealthy conditions. Protesters gather outside Kurukshetra towers and the riots bloom forcing hundreds of police personnel engaging with the public.

In midst of the riot, Krishna manages to get in the towers and free Vatsala, who is being held a hostage. But, the towers blow up and both Krishna and Radha are buried below thirty floors of rubble.

How will they survive? What will happen to the Asandivat family that seems to be facing enemies both within and outside the family? And how did Abhimanyu die?

Let me start by saying that I found this book and easy read and a pleasant surprise in terms of the way the author has built the atmosphere and the inter-relationships of the Pandava and Kaurava families. The use of Asandivat – which is another name for Hastinapur – Arjun’s marriages to Subhadra and Draupadi, the sharp-shooting skills of Drona and Parshuram, rivalry and friendship between Arjun and Karna and the repeating theme of men from both sides of family vying for affections of the same woman is woven together very well. The author manages to make these characters convincing living in today’s world and facing the challenges that are new and yet oddly familiar.

Most of their troubles seem to be brewing from misunderstandings again and again. Also, miscommunication, as everyone seems to have a different version of events. The investigating part is also cleverly filled with lots of clues and red herrings – poisons, drugs, messages from unknown numbers, 3D reconstruction of the scene from videos shot by patrons and forensic analysis by experts.

It is also interesting to see how the legal battles are won most of the time outside the court. And there are times when you can understand Radha’s frustration as to how the rich and powerful people seem to have endless amounts of tools to get them through their troubles, while the poor have hardly any options:

Anyone can be strong and independent backed with loads of money. A failure has no meaning. When people with nothing fail, they lose more than everything. They lose the chance of ever standing on their own again.

The author uses a well-known story about family reunion due to a sick child as Abhimanyu’s likely motivation and plan. But, he also clearly shows how sometimes the consequences dictate the moral of the story:

And with Krishna there, there are bound to be philosophical gems:

As long as there is doubt, there will be suspicions. The longer the supicions last, the more anger will fester. Tragedies will occu, surely and relentlessly. The truth must come out. Only in truth lies all our salvation.

And in midst of all the layers of mysteries and questions, Radha finally finds that solutions are usually simple, once you find the key:

If a lot of people, many of whom have nothing to gain by it, state a fact, then there must be some truth in it.

Although I enjoyed reading this book, there are quite a few proofreading and typographical errors, which should be removed in the next edition. For example,

Hang-out of his Kaurava uncles, arch rivals of his own family.

The above sentence should have been printed as

This was the hang-out of his Kaurava uncles, arch rivals of his own family.

The navy was though, but I had lost my live and there was no pain greater than that.

The navy was tough, but I had lost my love and there was no pain greater than that.

We worked hard and used a lot of our army contracts. To our dismay, it seemed our competitor was well connected with the military, too.

We worked hard and used a lot of our army contacts.

Sorry, but I am a sceptic.

Sorry, but I am a skeptic.

Beat Laxman almost to an inch of his life.

Beat Laxman almost to within an inch of his life.

He was so afraid to embarrass her that he had stayed as far away as she could.

He was so afraid to embarrass her that he had stayed as far away as he could.

A past discretion should not be used as a weapon to destroy all one has worked for over the years.

A past indiscretion should not be used as a weapon to destroy all one has worked for over the years.

The speaker here should be Uttara, as she is the one responding to Krishna, not Radha.

Vatsala let them argue for an untempt time

Vatsala let them argue for an umpteenth time.

Part three could also use some editing, but all in all the book keeps its pace throughout. And the author does justice to all the characters he has taken from the epic and also gives us some interesting takes on some e.g., Radha, Jarasandh and Karna. The book ends with a cliffhanger and it would be interesting to see, if a sequel is being written 🙂

In summary, an interesting and entertaining tale of family rivalries, murder mystery and conspiracy plots making a good package for readers looking for a modern-day thriller version of the epic.