As we have noted in a few posts lately, the revival of ancient and mythological stories of India has become a popular and fast-selling genre for fiction books. Especially for those young people whose exposure to Sanskrit literature and mythology has been limited at school, these books provide a great source of pleasure and knowledge. And hence we are always glad to write about authors from this genre who have created a successful path for themselves.

Recently, we came across the works of Anuja Chandramouli whose debut book “Arjuna: Saga of a Pandava Warrior Prince” was very well received by readers in 2013. Since then this happily married mother of two girls has published five more books that have won her many accolades. She also runs workshops on creative writing in schools and colleges and is a regular contributor in magazines and newspapers including Femina, Women’s Era, Lonely Planet, The Hindu and the New Indian Express.

Here is a list of her novels published by Rupa and other publishers:

As you can see, four of the above books tell the stories about the family of the Mahadeva and we recently read Kartikeya: The Destroyer’s son.

The title itself is intriguing as the story of this elder son of Shiva has so many different versions across India, including our all-time favourite Kumarsambhavam (कुमारसम्भव) by Kalidasa. 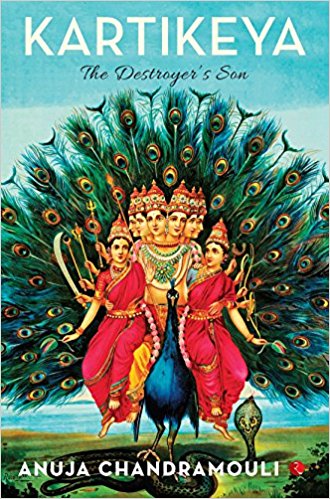 The most debated stories however are about his exile from Kailasa to South India which has resulted in his almost absence from North Indian temples while he is worshipped in many forms including Murugan, Skanda and Subramanya across all South Indian states and indeed wherever South Indian people live across the globe. The stories include many versions but a family spite seems to be at the heart of many of these, and we were keen to explore Anuja Chandramouli‘s version of events that transpired the birth of Kartikeya and his divine life.

This book starts where Kamadeva: The God of Desire finished with annihilation of Kamadeva by Shiva and finally his marriage to Parvati. Now the three worlds are waiting with bated breath for the birth of the natural son of Shiva who will fight the evil trio of Soora, Simha and Taraka and free the worlds and devas from their tyranny.

However, the heir is very long in coming and the impatience of the Devas lead to an unusual birth that involves Shiva, Vayu and Agni playing a part such that six children are born on the banks of Ganga. From here, they are adopted and lovingly reared by Kritikas, the earthly representation of the astronomical cluster called the Pleiads.

Eventually, the six siblings emerge into one and returns to his natural parents as one healthy, handsome and bouncing boy called Kartikeya. But the Devas are still not happy. They want the boy to get on with his task in life i.e., plunge into the warfare and kill the demons. But there is a time for everything. There is a time for Kartikeya to be a child and enjoy pleasures of growing up on

Kailasa where his doting parents can’t get enough of him.
But if things won’t take its natural course fast enough, someone always comes up with an evil plan. In this case, Indra plans for a heinous attack and killing of Soora, Sinha and Taraka’s only sister, Ajamukhi while she is visiting a Shiva temple alone. The three brothers are then out to avenge their sister and all three worlds are plunged into the volcano of destruction.

Kartikeya has no option but to go to war. But then, death is the only certainty in this life and he is only liberating Soora, Simha and Taraka from their miserable existence that has lasted so long that the meaning of life itself has been lost to them. How he achieves that, is to be enjoyed in the book. He finds a rather unusual ally in Indra’s daughter Devasena. While Kartikeya and Devasena are smitten with love for each other, the union is strictly forbidden by Parvati to whom anything to do with Indra is anathema. So the lovers are parted until the war is over.

But an end of the war is actually the most difficult time during the war, because it only takes an instant to kill an enemy but it takes ages to nullify the damage done by the war and convert the ravages of war into a beautiful, lush, fertile land. This becomes Kartikeya’s next task which he performs in a rather promiscuous way, but to extreme satisfaction of all concerned. However, Indra who cannot conquer his jealousy for this incomparable son of Shiva, attacks him with his Vajra. But instead of killing Kartikeya, the attack results in liberating numerous forms of Shaktis residing inside Kartikeya who attack and destroy Indra including every last particle of him, including his only surviving child, Devasena.

The death of Devasena, however, is unbearable to Kartikeya and in answer to his prayers, Parvati revives Devasena and the lovers are finally united into matrimony. However, their happily-ever-after is not quite the traditional one.

But as Kartikeya has experienced throughout his life, there are really no happily-ever-afters, if the continuously deteriorating state of the Shiva-Parvati marriage is any indication. The disputes between them finally culminates in Shiva killing their own child in rage and then reviving it as Ganesha so that their family is finally complete.

Kartikeya now decides to move to South India and the story ends on his finding a new love, a new wife in Valli.

The trick with making a mythological book work is the presentation of the old, well known story in context with the new, the current world. And Anjuja Chanramouli does this very well. While the story of Kartikeya is not new, the sequence in which his life is played out is. This is no war-mongering, power hungry senapati of devas, but a philosophical, lovable and loving youth who cuts out what’s rotten, so new life can be born from old.

While a popular North Indian mythological version of him is Kumara – a brahmchari ascetic – here he has many consorts and at least two wives with a promise of more to come. He is the son of a destroyer, but he is also the source of life.

I quite enjoyed the way Anuja Chandramouli builds up the mental and psychological states of Soora, Simha, Taraka and Ajamukhi, finally leading to their natural ends.

The dialogues are witty including many pithy remarks on love and matrimony while the author works her way through Shiva and Parvati’s marital woes to birth of Ganesha. Many readers may find this story interesting as it is a different version from that most widely known in North India. But that’s the beauty of Indian mythological stories – every poet and writer has his/her own version and irrespective of the path taken, they all arrive at the same conclusion.

It is too bad Mother forgot to tell us that getting your heart’s desire is oftentimes the worst thing that can happen to you! And sometimes all the effort and hard work expended in the pursuit of glory is almost not worth it.
—– —– —– —– —– —–
Aja trembled ever so slightly, duly noting that being cognizant of one’s part in the larger scheme of things engineered by fate and destiny did little to inure one from the pettiness of a small mind or mean spirit.
—– —– —– —– —– —–
The important thing to remember is that though the journey you are to undertake must be your own, you are not alone. All things in existence are connected to all else and the threads that bind us together may be gossamer—soft and delicate, but they are strong enough to withstand being torn apart despite being pulled in all directions by the best efforts of every single thing they hold together.
—– —– —– —– —– —–
Even if Indra were to get the crown and throne that you yourself owned, surely you are aware that he would derive as much happiness from those worthless baubles as you yourself did, which, if memory serves, was next to nothing? His need for power is every bit as misguided as your quest for revenge and is likely to yield the exact same empty rewards.
—– —– —– —– —– —–
It bothers me to no end that precious life and bonds of love are so tenuous and fragile. Losing a loved one or watching the elements lash out arbitrarily in the form of natural disasters like earthquakes, erupting volcanoes, floods, tornadoes and claiming lives at an alarming rate is awful enough, but worst of all is the conscious decision made by those of us who wield power to kill those who look to us for succour and sustenance. The guilt is something that can scarce be borne and I cannot help thinking that my actions which had such cataclysmic consequence are beyond the reach of forgiveness.
—– —– —– —– —– —–
My son is neither vile, treacherous, nor ordinary. He has performed truly extraordinary deeds and it isn’t his good looks, expertise with weaponry and other talents that set him apart, prodigious though they may be. It is his innate goodness and endless capacity for kindness as well as compassion. If everything in the three worlds, possessed of a male member, including present company, were to emulate him then we would not have to deal with half the problems we are currently dealing with.
—– —– —– —– —– —–
Parvati had found herself disillusioned when she discovered that perfection in love or marriage was never meant to last.
—– —– —– —– —– —–
We loved each other. Always did. A little too much in fact. To the exclusion of all else including our very selves. It reached a point where neither of us knew where Shiva began and Shakti ended or the other way around. We were one and same. Our union was one that transcended everything including bliss and happiness.

The book is an easy read, as it builds up scenarios with richness of language and abundance of explanations trying to put new colours into the old stories. The dialogues are real and although sometimes modern expression do feel out of place while spoken by eternal Gods, they do keep the story going. It is understandable that the author needs to keep some parts of the story light in order to balance the philosophical discussions.

We are looking forward to read other works by Anuja Chandramouli and publish more reviews in coming days.

Previous: Jumanji: Welcome to the Jungle | Movie Reviews
Next: Interview With Col. Mohan Vizhakat | Author Of The Ancients Of Greater Bharat