There are so many reasons that lead us to the world of books: education, entertainment, escape, etc. But the books also are one of the best tools to inspire introspection, especially when we read works that serve as almost analytical history of time passing, generations moving and history forming.

As the world has commemorated a century of the end of world war I, books featuring events from World Wars I and II have been a continuous stream, especially as writers research and write about lesser known battles in far flung corners of the world.

The Andaman and Nicobar Islands have been a rich, tropical, paradise that until the arrival of Europeans in the 1800s, harboured tribes that went back in time almost 60,000 years and could be traced back to the continental drifts from Africa.

But with colonisation came powerful weapons, violence and diseases. Also, the islands became the place of imprisonment when the British constructed the cellular jail in Port Blair. But in a more recent past, the islands also suffered the Japanese invasion in the later years of world war II and were caught in the battles between the allied and axis forces.


Writer Aimee Liu has created a story featuring a young couple and their infant son, as they get caught into the whirlpool of events of these times in her book called ‘Glorious Boy’. The setting of the book was intriguing enough for us to read this book and here is oour review of this book on behalf of ThinkerViews. 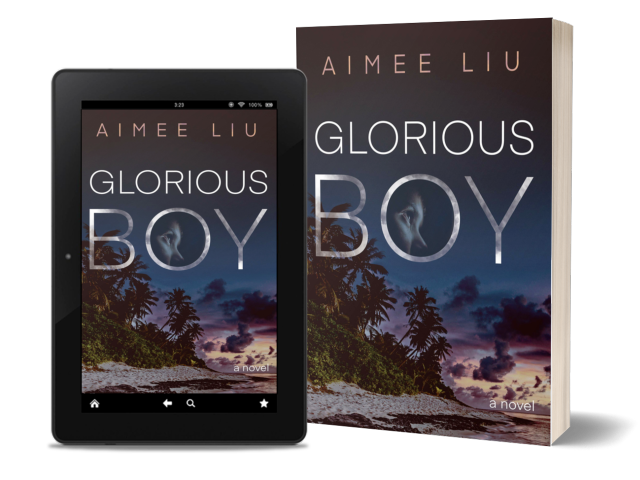 The unusual shades of colors used for the cover page gives an impression of an attractive digital item. The “thin” fonts used for the title and the author’s name adds to the impact. Also, the face of a boy looking from the title is placed very intelligently. The natural background looks in sync. Overall, an impressive cover page.

It is March, 1942 and Dr. Seph Durant and his wife Claire are facing the day of evacuation. They must leave the home on Andaman and Nicobar islands that they have called home for last few years if they are to get back to safety from the uncertainties of the war that is knocking on the door. In the frantic need to pack, all her study specimens from last few years of her studies of the local tribes, Claire asks Naila to take her son Ty away for a while – keep him out of the way.

At four years old, Ty doesn’t speak. He is a wilful, insightful child whose closest friend in the world is his caretaker Naila, a child of thirteen herself. The children wander away to a tree hide-out and fall asleep. By the time, they come back to the house, it is too late. Seph had to inject Claire with sedatives to get her on board the last leaving ship. There is no escape left to the three of them now. In desperation, he tells all his acquaintances that he cannot find either Ty or Naila.

Claire had been studying the local tribe of Biya and it is to their care and fate that Seph now must entrust the lives of Naila and Ty. He sends both in the forest with Leyo, their link with the tribal people. Soon enough, the Japanese arrive on the island and an era of brutality starts. Remaining Europeans and islanders are tortured and Seph is executed along with his remaining friends.

On the other side of the Bay of Bengal, Claire arrives in Calcutta, with guilt swarming through every pore of her and with no way to find out what is happening to Seph and Ty. She meets her sister-in-law Viv here and joins the code-breaking unit at Barackpore in hopes of finding something of her family. When the ex-police superintendent Denis Ward arrives to Calcutta, he brings the news that Ty and Naila were never found. Slowly, Claire comes up with the idea of developing a code for the armed forces based on the Biya language and fate sees her coming back to the island as part of a four-men intelligence gathering unit led by Denis Ward.

It is here that she finds out that her husband was executed months ago. While she still harbours a crazy hope to find her son alive after almost a year since she left the island, there is really no way to get him with the dangers facing them through this hostile land at every step.

And what did happen to Naila and Ty? How long will the tribe of Biya be safe with the armed invaders coming closer to them every day?

The book starts with following lines:

The fish in the water is silent, the animal on the earth is noisy, the bird in the air is singing.
But Man has in him the silence of the sea, the noise of the earth and the music of the air.
-Ravindranath Tagore, Stray Birds

While my first reason to pick up this book was the premise, I found that the story and the characters pull you in right away as well. As you see Seph and Claire come together – one a British subject borne in Shanghai, the other an American girl with hopes to become an ethnographer – and their journey to the Andamans, their building a family while still coming to terms with the tragedies of their past and losses and their struggles to balance a love for the forest and the need to study the flora and fauna and the ancient tribes around them and an intelligent and strong-willed child, neither of them fully seem to understand.

Increasingly, this leads to Claire questioning herself and her motivations and her ambitions:

Dare to be ambitious, to see your opportunities and seize them. But ambition is worthless, unless it’s rooted in human understanding.

But it is after the events turn for a worse in a moment of chance that we see how truly fate is playing a hand in making puppets of them. And it is only in these times of trouble, that we see the strength of their characters and at the end of it all, an ability to change, survive and above all, forgive those who survived. The author also shows how unpredictable love is and yet how easy it is for humans to connect only if you move past the barriers built by no one but ourselves.

When Ty has no words, he connects to Naila through their shared language of signs and peace and they both connect to the Biya people when fate brings them there after they have lost everything they know of. It is in this world that they learn to live at peace with nature, birds, beast, predators and prey in this forest that could give and take life in a moment and yet has no brutality or cruelty that could match that of the humans.

speech is transactional. But the nonverbal language of spirits was communal and emphatic. It was also the language of nature.

Their time with Biya is richly detailed and in no way free of difficulties that also lead to another separation and Leyo, Naila and Ty become their own unit. And yet, neither of them lose the love they have for one another, until they have to part ways again. These sections of the book are the ones I liked for the narrative and the rich beuaty of the natural setting – mosquitoes and all. And what I liked most is how Ty learns observing and studying the owrld around him. We are nearly losing this as our children grow in the cities and towns of peace time that have luxuries of internet and entertainment avialble 24×7 that takes away the need to ask questions and find answers.

The book is generally well-researched and well-written and does paint a detailed picture of life in Andamans at the times. Through the separate thread of the warfare, we come across another lost way of the world and various viewpoints about the mixed heritage of a place like the Andamans, freedom movement of India and the last vestiges of the Birtish Raj.

There are many points, expressions and views in this area that you may or may not like. There are also a few erros here and there in the narrative, e.g, when Claire and Ty comes back, it is mentioned that Ceylon stretched across them, but everything following suggest they are in Calcutta of the time. Apart from that and bit of a lost pace in the middle, it is a good reading experience. And the take away from all the warfare is quite simple:

The most difficult thig is to remember that enemy is human, but this is also the most important.

Previous: Death in the East by Abir Mukherjee | Book Review
Next: Dare To Live! By Himanshu Bhatia | Book Review