Posted by: Editor May 10, 2021 in Books, English, Magic, Popular Leave a comment

If you like reading fantasy literature where magic and reality are intertwined, you may be familiar with the name of author Lev Grossman. Although he has been writing for number of years for various newspapers and magazines, his most famous set of novels are ‘The Magicians‘ series, which was loved by readers and also adapted for TV series.

But it is his earlier work – a thriller called Codex – that we are featuring today. And if I share the definition of the word with you, you’ll see right away why we were drawn to this:

A codex – As opposed to a scroll, or a wax tablet, or a rock with words chiseled on it, A codex is a set of printed pages, folded and bound with a spine between two covers. Its what a layman would call a book.

A book that deals with journey of books 🙂 I couldn’t wait to read this and share my views on it with Thinkerviews.

Being responsible for making the first impression of the book it belongs to, the cover page plays quite an important role in influencing a large number of book purchase and/or reading decisions. 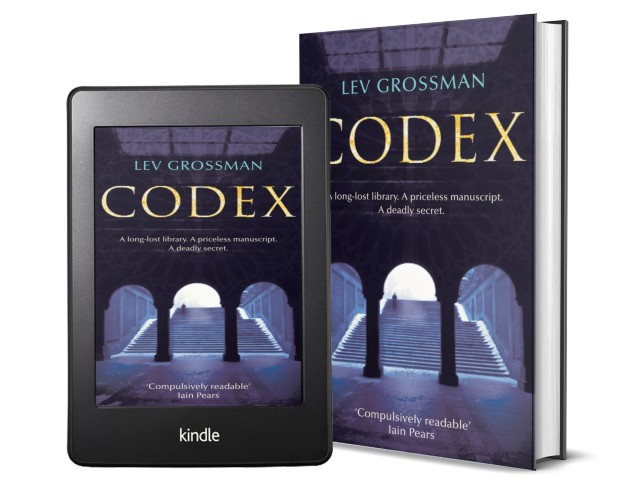 The earlier version of the book has quite a simple cover page, this updated cover page is more detailed. In a long distance shot taken, you see someone is climbing up the stairs. The dark color creates the mystery effect. The effective and balance use of the light color alongwith makes it impressive.

Edward Wozny is on his way to a New York apartment that happens to be the residence of one of the wealthiest family in the world. Edward is an ‘up-and-coming’ investment banker who is currently of a couple of weeks holiday – first time in years- while he prepares for his big move to London office with a huge promotion and expectations of even higher workload. He is almost at a loose end without his madly busy work life to energize and propel him onwards on daily basis.

The family is not in residence. Instead, he meets Laura, an assistant to the Duchess of Bowmry. She shows Edward an apartment full of wooden boxes, containing books that were shipped from England decades ago and have been left unopened since. These crates contain the whole library from the castle of Went family called Weymarshe and have works of literature going back to centuries. The Wents expect Edward to unpack, catalogue and organize this into a library. Not only that, there is a specific request to locate a long-lost 14th century manuscript by an author called Gervase of Langford.

He fully intends to decline the job but needs to figure out how to do that without upsetting his firm’s big clients. But then he is slowly drawn into this seductive world of quiet and semi-darkness populated with age-old works. Looking for information on Gervase, he runs into Margaret Napier, graduate student researching medieval literature. They team up to organize the Went library.

Meanwhile, Edward’s friend Zeph has given him a videogame called Momus that turns him into an addict and proves to be almost equally obsessing to him as the library is.

Where will his journeys end? What will they discover from these quests? Where will their loyalties lie at the end of their search?

For book lovers who cannot imagine life without literature, the journey of preservation of the written word has always been fascinating – from the caves to clay tablets to parchments to paper and now electronic devices. There were times when access to written word was luxury reserved for very few. While today, billions of people enjoy unlimited access to uncountable number of books – old and new. This has all become possible only as the technology associated with paper and printing came into being.

And Codex highlights this throughout the book. The journey of Edward through the most exclusive libraries is a dream come true for all bibliophiles. He discovers the science of books, of cataloguing, of storing, of retrieving a particular book amongst thousands. The fragility of the old words, the efforts required in preservation and the almost callous way we throw thousands of these away every year show us the extremes of this world. And then there are people like Margaret, who dedicate their whole existences to the discovery and maintenance of this world of old books.

Codex is worth reading just to enjoy the world of books it inhibits. And then there is the quest, the thrill of trying to find something that is lost and only a myth has been left behind. The book is quick, fast-paced and Edward gets deeper by the minute. Lev Grossman adds another layer of semi-reality as Edward gets hooked onto a fantastic video game almost at the same time and travels deeper into its new and yet familiar landscape. His whole existence undergoes a change in two short weeks and yet at the end, what has changed?

The point where Edward starts, is a very familiar point of almost all millennial professionals:

Binging on work, wallowing in it, gorging on it, sixty, seventy, eighty hours a week. The more work he did the more there was to do, and he could always find a little more appetite for it, and a little more room in his belly to stuff it down. The only thing that was finite was time, and you could always fix that by sleeping less. Every evening as he set his clock radio he calculated how little he could get by on, like a diver making a dive plan for a dangerous nighttime descent: balancing the pressures, estimating his endurance, rationing his precious reserves.

And from analysing massive amount of electronic feeds every moment, he moves into the world of old books:

They were non-digital, nonelectrical chunks of memory, not stamped out of silicon but laboriously crafted out of wood pulp and ink, leather and glue.

I thoroughly enjoyed the sections where Margaret explains to him the process of publication through middle ages:

Making a book back then took a lot of time and a lot of money and a lot of people with many different skills. You had to purchase the parchment and the pens and the ink. You had to have the text written out by a scribe, then it was illustrated by an illustrator, then bound by a binder.

It was too expensive to keep making book covers out of wood. so they started using pasteboard instead, which is glued-together sheets of paper covered with leather. Switching from parchment to paper which did not require wooden covers to keep them flat.

Objects like these don’t just slide through history untouched, invisible, without a trace. They leave footprints behind them, tracks.

There is a fundamental change in the way we have come to view books. For us, they are gateways to another person’s life: romance, escapism, entertainment. In fictional world, things are logical, they make sense, good people have happy endings, life is enjoyable in spite of the ordeals and so on. It is an alternate reality to escape in. But when it was not available in abundance, the medium was rarely used for escapist entertainment:

We read books for fun, to escape from the world around us, but back in the middle ages, books were serious business. Literature was for worship and instruction, for moral improvement. Books were vessels of the Truth.

There also was no obsession over proprietorship:

Not every age was as obsessed with who owns what as ours is. the author was concerned only with the truth. He was its steward, its temporary curator, not its owner. They had no conception of plagiarism. If one man copied something somebody else wrote, it wasn’t a crime, it was a service to mankind.

And then there are the fantastic elements, where Edward’s realities are all mixed up and he seems to lose all the will to go on:

He was experiencing a moment of temptation, and to make matters worse it was the most diabolical temptation of all: the temptation to do nothing, to sit back and let thing happen and get completely out of control.

A giddy feeling came over him, like vertigo, as if he were an empty-handed animated character in a video game, and somebody somewhere else was playing him.

Not to forget the codes in the codex and hidden secrets:

Steganogram is a technical term from the field of cryptanalysis. It refers to a message that has been encoded in such a way as to conceal or camouflage the presence of the encoded message itself.

With all the above layers making an intricate web, and the events unfolding around Edward that he can’t really get a grip on, the story hurdles towards the conclusion. But finding the object of their quest, a unique book, a lost manuscript hardly leads to a victorious celebration. Just like his other works, the author gives us a strange twist at the end here too. There is hardly such thing as happy ending in real life.

An enjoyable thriller for all readers of intelligent quest readers who would love to travel through thr journey of books.