Home / Books / Beneath the Keep by Erika Johansen | Book Review

Beneath the Keep by Erika Johansen | Book Review

Posted by: Editor February 21, 2022 in Books, English Leave a comment

Fiction and story-telling is our way to make sense of the world when it gets out of hand, when things don’t make any sense, e.g., when you see intolerance and injustice all around and wonder why humans can be so capable of feeling the pain of others and so cruel at the same time. We think of the great revolutions of history and where they have brought us and why it is sometimes that it feels like every big historical battle was for naught. It is in fictional tales that we search for utopia.

Western fantastic fiction is normally filled with tales featuring princes and princesses, magicians and knights in shining armor. And so is the trilogy written by Erika Johansen featuring young Kelsea, who becomes the Queen of the far-away nation of Tearling at the age of nineteen in first book of the series called The Queen of the Tearling. The series features two more instalments namely The Invasion of the Tearling and The Fate of the Tearling, through which the writer shows us a modern dysfunctional society, a revolutionary quest for a better world and evolution of another dysfunctional society.

The series makes a very good read and we enjoyed it when it was released. Recently, the series has been extended in form of a prequel telling the background story around the time Kelsea was born. Named Beneath the Keep, this book is the author’s continued attempt to remind us of what constitutes a fair and just society and how little it takes to lose the concept of fairness and equality.

Being the gateway to the fictional world explored within, the cover page plays a very important role in a large number of book picking/purchasing/reading decisions. Let us take a look at the cover page of this book: 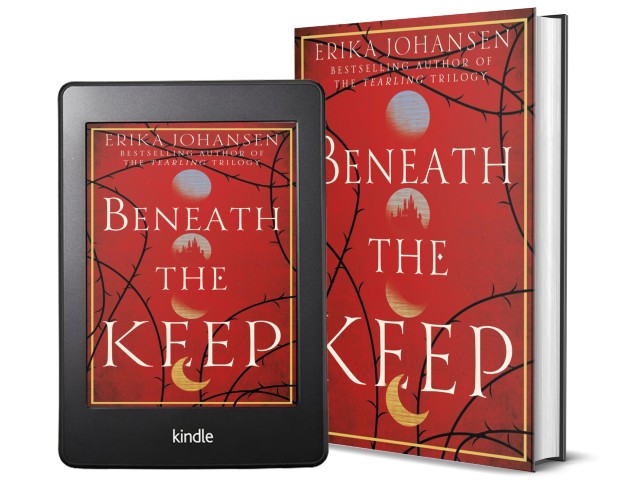 Beneath the Keep by Erika Johansen | Book Cover

As you can see the blood red backgrounds reflects the content of the book quite well. The barbed wire like illustration of a dry tree, the changes faces of moon and other elements add to the thrilling and mysterious elements of the book.

The Tearling is a feudal society where the farmers starve and their noble lords thrive unconcerned. Queen Arla is in her full power and grooming her daughter Alyssa to become just as cunning a politician as she is. But there is a revolutionary society called the Blue Horizon that is trying to remind people of the better world that is so near they can almost touch it. The heart of this society is a man called Gareth. He is captured and tortured by the Queen’s orders, but Alyssa begs for his release and before she knows it, she falls in love with him and people start seeing Alyssa as the True Queen, whose arrival they have anxiously been waiting for.

Underneath the street of New London and the Keep of the Queen is the underground world teeming with abandoned children and all the evil in the world that can be imagined. From the depths of this hell has grown up Lazarus. Once upon a time, a young boy named Christian, he is now the most accomplished killer. But the Creche has ways to hurt even those who are used to its cruelties. And a twist of fate sees Lazarus become the Queen’s guard. But what is his purpose in becoming one?

In the plains of Almont, the draught has burnt everything to dry dirt. And the starving farmers become rebels when there is no other option left but to die. When their revolutionary army led by Arliss and grouped with the Blue Horizon come to New London, they are hoping that the Queen will listen to them. Instead they meet unimaginably cruel end.

Is there ever any hope – whether you are a princess or a prize killer or a starving rebel or a revolutionary?

What I have liked about this series is that it combines the appealing fantasy elements of teenage fiction including princesses and queens with the dysfunctional adult world of the near-future – if we let intolerance and extremism win the day – and convincingly combines magic and time travel, past and future, in a comprehensive tale. Too much of fantastic fiction is an attempt to escape in the world of princesses and warriors while all around us we see that a need for revolution is going to never be absent from our lives. There will always be a cause to fight for – as long as we remember to fight for a just world, a better world for future generations.

Beneath the Keep is a good edition to the series, as in some ways it answers a lot of our questions about what Tearling was like in the decades before the Glynn Queen came to the Keep and how it became like that. While it is good to see how Lazarus became Lazarus, it is even better to meet characters like Niya and Arliss that keep the spark of revolution alive even in their deaths. It is hard to see the spark within Alyssa die and the likes of Arlen Thorne win the day, but at least we know that in spite of all these cruelties and misery, a better world may just come into existence.

As we go through Alyssa’s journey and see how her mother uses religion as part of her ploys, it is not so difficult to draw the parallels with the revolutions of not so long-forgotten times:

Saviors are only useful to people who need saving. People who are fat and happy don’t want anyone meddling with the status quo.

There’s all the difference in the world between what we believe of others and what we need from them.

People who worry about their everlasting souls don’t have time to take up arms. God is morphia, and he anesthetizes most effectively when Crown and Arvath work in lockstep.

But the book also shows how all politicians use propaganda:

Truth is always easier than a lie. In fact, truth sells a lie, much better than the lie sells itself. Simple self-interest mandates at least a pinch of honest in all of our dealings.

The book talks a fair bit about how even with best intentions, most revolutions seem to go in full circle in a few generations so as to appear to become a society very similar to the one they were protesting against to begin with, how the sense of power and wealth without social awareness is a bitter seed that only grows into inequality:

The divide between wealthy and poor was nothing short of an abyss, but the gap was made even worse by the total absence of that concept called noblesse oblige: the notion that power and privilege convey responsibilities as well as rights.

It was the nature of humanity to cycle, to move from great to dreadful, utopia to terror. Even if they reached the better world, how could they possibly hold it against each new day’s onslaught?

There is no ultimate hope in revolution. The power of money is too great. In the handful of historical moments when a revolution initially succeeded, the revolutionaries invariably cannibalized their great achievement by turning into what they had once despised.

And when the society degenerates so, people need something to put their hopes in. In the Tearling, they hope for the True Queen, someone – anyone else – to understand their pain and save them, for what otherwise is the point of all the suffering in the world. But what we deem heroes are also only human after all.

Every story / every epic fiction / every fantasy has a hero / a heroin. But is it not our need to have heroes just a need to put responsibilities on shoulders of someone else?

Humanity extols victory. Battles won, legislation passed, tragedy surmounted…of such moments is history made and fixed. No one wants to talk about the hidden cost of victory, the danger of overreach. But that cost is there, all the same. Arrogance makes fools of us all.

Another big thread in the story for me is the Creche. How abandoned/ sold children left in this hell grow up, where morality and abilities take second place to survival and survival only. And yet, some innate goodness can still be found in the most evil of places:

In a world where brutality was a constant, it was infinitely better to be the one holding the whip.

The book could have been better in terms of structuring as it attempts to combine the happenings of the capital with the revolution of farmers. At times, events of one storyline overpower those of others. But apart from that, it does bring to life some admirable characters and gives us a glimpse of the hotbed from which oppressors and revolutionaries are born.

Although this is a prequal to the series, I would recommend that you read the Tearling series first and then try this prequal.

An interesting addition to the Tearling series that explores the quest for utopia and how it leads to dystopia over a few centuries.

Previous: The Postwoman and Other Stories by Priyadarshini | Book Review
Next: Whispering Bricks By Siddhartha Bhasker | Book Review