A Flight of Broken Wings by Nupur Chowdhury | Book Review

Nupur is a young writer who has a day job as a copywriter and “The Flight of Broken Wings” is her first full-length novel that she sold to Amazon for less than a dollar (as per her blog :)). By the way, her blog is well worth browsing through if you are a lover of fan-fiction as well as enjoy articles on all things new and old and poetry.

The cover page shows a pair of white wings cleaved by a sword in the middle and spattered with droplets of blood, all on a black background. 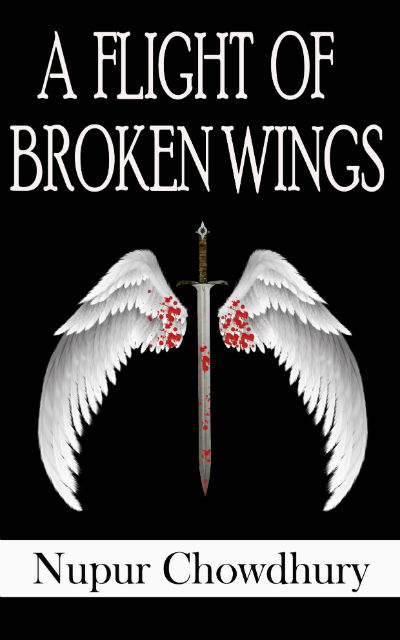 A Flight of Broken Wings by Nupur Chowdhury | Book Cover

As covers go, it is simplistic design and while it has that elegant black and white appeal, it does not prepare you for the adventure ride inside.

There is a lovely, colourful, fan-art image at the end of the book and I think it would be great if Nupur invited fans to design a different cover page for newer additions and see where their imagination takes them 🙂

And here is the crux of the matter – The story.

It is a modern world – not very different time-wise than us – 21st century, but we are in a country called Vandran, more specifically in its capital city called Ragah. It is “Emancipation day” (like our “Independence Day”) and one of the main protagonists Ruban Kinoh – Chief Hunter of South Ragah division, has been summoned for a meeting with his uncle cum leading politician Subhas. In the meeting, he reluctantly agrees to take a diplomat as a partner. He is a young nobleman from the neighboring country of Zaini – namely Ashwin Kwan. With his big innocent eyes and runaway mouth he has been darling of the media and is making waves about a conspiracy to steal one of the most important weapons research formula – Enhanced Sifblade.

To give you a bit of background – Once upon a time, the Earth was the second home to the species called Aeriels. These are pure energy beings, who feed on sunlight, can fly and are immortals who don’t age. The humans believe that Aeriels were tyrannical overlords and six hundred years ago humanity rebelled and drove them away. Except for a few, including last queen Tauheen, who have been since been leading terrorist attacks on the humans. The only weapon that works against Aeriels is a Sifblade, a material found on Earth that drains the Energy out of Aeriels at a rate faster than it can be replenished.

The mission given Ruban is to protect the new, enhanced weapon formula from Tauheen and her minions, while trying to keep Ashwin out of trouble and try to keep himself and his family alive. He is one of the most well-known and successful hunter of Aeriels in this generation, but he still has his demons to fight.

As the reluctant partnership between Ruban and Ashwin progresses, Ruban discovers that there is a lot more to Aswhin than he sees. And history is hardly ever as straightforward account of wins and loses as we receive it. There are always multiple sides to any story and the alliances around him are not as they appear…

Everything that appears to be is not apparently so…

Will he survive the conspiracies created by one of the most powerful beings on the Earth? And what cost has he already paid and needs to pay on the way?

While India has some of the best fictional and fantastical literature around, a lot of it is covered in the cloak of mythology and it was a delight to read this book that feels like pure fiction set in a familiar yet different world.

Nupur deserves a lot of credit for this debut book that is one of the best we have recently come across. She builds the story and the characters in details as we go through the story and makes it a very enjoyable journey. The language used in book is the same that most young Indians will be using, without addition of words from other regional languages but using familiar expressions that may or may not have their origins in India.

The characters are smart, funny and relatable. They will remind you of people you come across on a daily basis, either in real life or on TV. You know how many times you watch a movie or TV serial episode and think – really?! Don’t be stupid! – you would find that Nupur feels the same. So most of her characters act logically but also think with a wry humour at their situation at times and we loved some of their observations on the society that show a lot of pithiness:

Obsolete as they were, Kings and Queens, or at least the idea of them, seemed to hold an almost visceral appeal for the masses.
— — — — — —
Nobody cares what really happened or how; what matters is what the public thinks happened.
— — — — — —
Eloquent victory speeches should always be reserved for after your enemy is safely dead. Because while long-winded pre-murder tirades might sound cool in principle, they were never quite worth the sheer awkwardness of having your victim escape at the end of it, thus rendering the whole exercise pointless.

And although there is a fair bit introspection at times, the story keeps the pace of a thriller with new characters, events and chases. The fight scenes are well-written without being too gory. Since the set-up is fictional and filled with a lot of unfamiliar names as well as settings, the first couple of chapters may take some effort to read, but once you are into the story, you will find it hard to put it down.

The author weaves a lot of philosophical concepts in the story without making heavy work of it. For example, how many times we have all thought that history is written by winners and hence is a one-sided account that leaves a lot untold. But history also forms the basis of a lot of our opinions and prejudices in life, leading to destruction and wars against those who we think have been in wrong in past. And yet if we look at them closely, they are no different when it comes to day to day lives and struggles. There is always an ally to be found if you look past your prejudices and one of the best chapters of the book is where Ruban finds that all his learned history lessons have left something important out:

It is a folly to be tricked by one’s own prejudices. It can’t hurt to keep our minds open to the possibility that the universe is not quite as unidimensional or monochrome as we sometimes perceive it to be.

And when Ruban tries to learn the fundamental differences between the nature of humans and the immortal race of godlike beings that could absorb and manipulate the energy of the sun itself, the author highlights some of humanity’s virtues and vices that can roll into one:

Ambition. Drive, passion, desire – whatever you choose to call it. The motivation to better ourselves, to improve our lot in life. The thing that drives all innovation, all technological and social development, and all conflict. The want for more: more than what we were given, the hand we were dealt by nature.

The Aeriels… they were dealt a better hand than any other species in existence, so they never really developed those traits. They were born with everything, so they never learned to want for more, to want to improve themselves or their lot. They had no drive, no ambition; no real passion beyond the fulfilment of immediate hedonistic desires or aesthetic fancies.

Like every good story, this is also a journey for Ruban to find the limits of his own self, his courage, his bravery, his prejudices and his weaknesses:

At this point, courage was not so much a virtue for him as a habit, a professional requirement like any other.

Nobody deserves to know that somebody took the thing you loved most away from you, destroyed it forever. And to not know why.

And very similar to what Dumbledore said to Harry Potter:

More important than his numerous talents and achievements, however, were his intentions. Gifts are easy. After all, they are given. It is our choices that make us who we are.

As you can see from above, the book is filled with little gems and will not disappoint you. There are a few proofreading errors and the timelines may appear a bit blurry occasionally, but it doesn’t take anything away from the reading experience, as you grow to love the main characters and start to feel their pleasures and pain as they make their way across the minefields to find some answers and more questions…

We enjoyed this book, and can recommend it to all readers who love good fiction with strong characters on an exciting adventure…