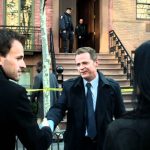 We have expressed our interest in viewing and reviewing – U. S. TV Series END_OF_DOCUMENT_TOKEN_TO_BE_REPLACED

Although Sherlock Holmes considered his powers of deduction perfectly natural and to someone of his intellectual stature elementary, he remains one of the most enigmatic and appealing fictional characters ever since he was created. The stories of Sherlock Holmes and Watson have appealed a few generations and there have been countless adaptations in various forms of art including drama, radio, ... END_OF_DOCUMENT_TOKEN_TO_BE_REPLACED